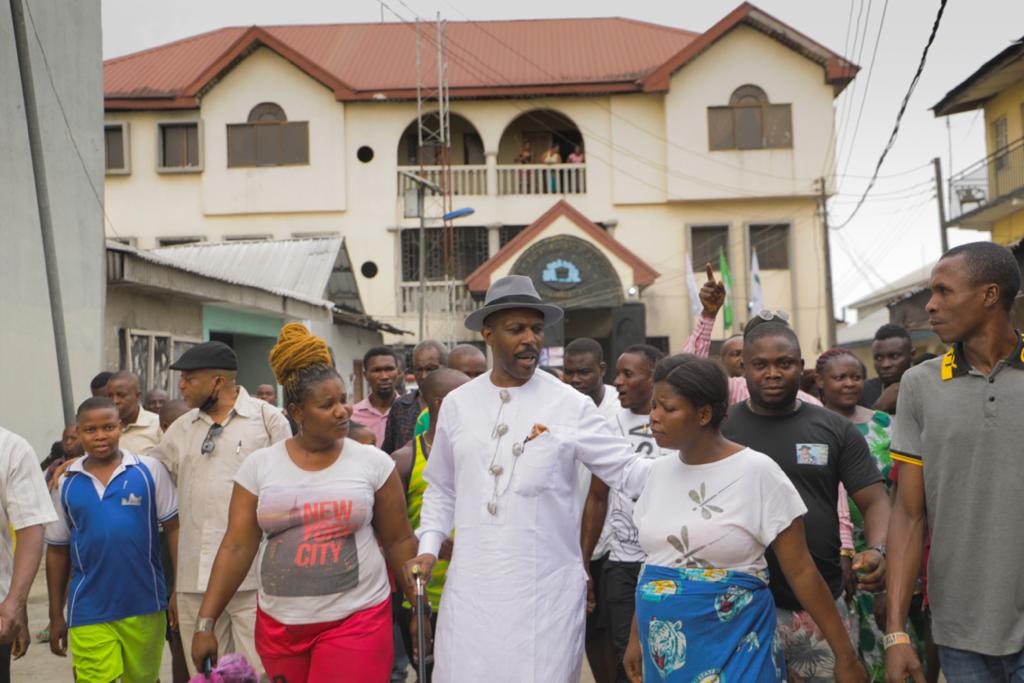 Yesterday in a surprise visit, the Prince of Kalabari Kingdom was overwhelmed by the great show of love that greeted him as he arrived the ancestral city of Buguma, in Rivers State to revalidate his membership of the All Progressives Congress (APC).

Word of his presence quickly spread and before long the streets were full with a mass of people seeping out from side streets, homes and tall buildings. Ordered, enthusiastic and ordinary, they followed him from the revalidation office to the palace and then on to other compounds in this well planned city, to pay a few visits. One visit was to an old lady who had recently been bed ridden. All of the while through all this, the now even larger crowd was singing and chanting as they followed along.

At the revalidation site, after he had registered, he was asked about the state of the party. In his response, he expressed a lot of relief in the possibilities ahead.

“Our dear party, in the state has been through trying times in recent years but I’m thankful for the recent victory at the Supreme Court and the opportunity to heal our wounds, strengthen our bonds and to move ahead as one unifying force for good governance and social transformation.

I thank everyone who stood by us and revalidated their membership, you are the true world changers. To everyone yet to revalidate or newly register with the APC, I urge you to quickly do so now. Nothing is as powerful as an idea whose time has come. Together we will make a change.”

On the recent comments by Magnus Abe, he said it was not news. “When Amaechi made comments that favoured him, he was silent. I agree that the Leader can not act alone in making such huge pronouncements. But he isn’t acting alone. He consulted, felt the pulse of the people and took a position. Magnus has not been around Amaechi for a while, so maybe he isn’t aware. You have to excuse him.”

He however agreed that no zone or peoples can do it without the others. “Magnus is right on that front. While I am grateful to the Leader for the recognition of reality, we know we have to work harder to make it a result. That means enough of paying lawyers and trouble makers and more of touching people. All sides are suffering. Supporters are dying. This should be our focus.”

On wether he would contest in the next election he pointed out that it was ambition that put us in the last problem. So he would not make the same mistake. “Anyone who loves the party and Rivers state will put politics to one side. It is far far too early.”