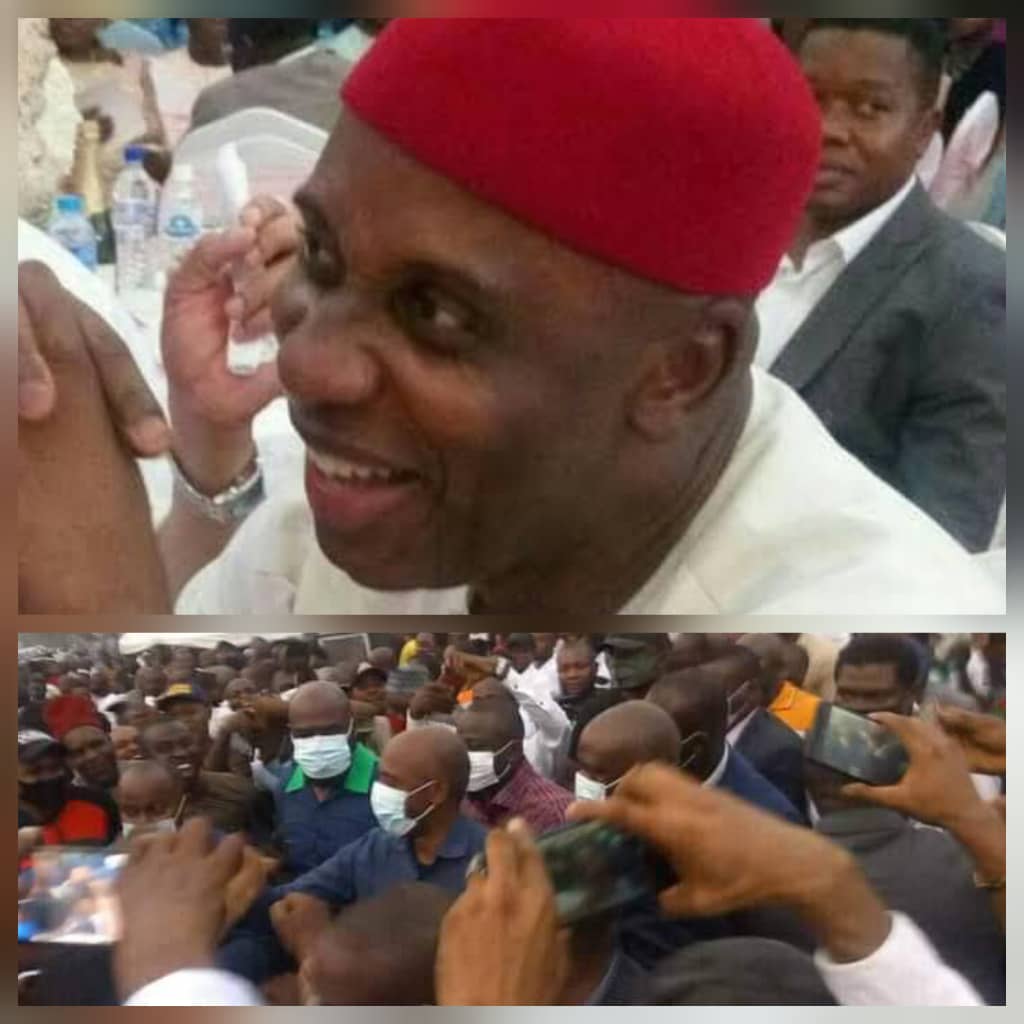 The quiet calm which has recently settled over the Rivers State Chapter of the All Progressives Congress (APC), following the Supreme Court Judgement which swept the party clean and disinfected it against all species of human pathogenic agents and tyrant saboteurs, is beginning to attract huge benefits, as the numerical strength of the party appears to be receiving some significant boosts in what can at best be described as an aggressive preparation to recover all lost grounds.

The development followed the tour embarked on by the Minister of Transportation and South/South Leader of the All Progressives Congress (APC), Rt. Hon. Chibuike Rotimi Amaechi, round the 23 (Twenty Three) Local Government Areas of Rivers State, to express gratitude to God and thank party members for their steadfastness and unwaveringly upbeat attitude, faith, support and commitment to the cause of the party and the pursuit for justice.

In a statement made available to media houses in Port Harcourt, Chieftain of the All Progressives Congress and erstwhile National Publicity Secretary of the defunct New Peoples Democratic Party (nPDP), Chief Eze Chukwuemeka Eze, said the Minister understands the yearnings and feels the pulse of the plebs and thus, by the tour, has resonated the timeless creed that sums up the spirit of a people bounded by the shared vision of a better and greater Rivers.

Reacting to the massive harvests of souls that followed in each local government area visited, Eze said the obligation of returning thanks is a crucial one, and the Minister, as a leader and statesman, understands the exigency of that singular duty to the masses which was properly enunciated by James Allen, when he posited that “no duty is more urgent than that of returning thanks”, and like Jacques Maritain puts it; “gratitude is the most exquisite form of courtesy”. Wherever he touched, Amaechi gave thanks to God and showered appreciation on the people thus, attracting multitudes in their hundreds and thousands into the fold of the Rivers APC.

Addressing crowd of supporters and party faithful in one of the local government areas visited, the Minister said, the tour was necessary to thank party members for standing resolutely with the Rivers APC through the periods of the legal mechanics and acrobatics when some lost courage and left.

Speaking in Emohua Local Government Area, Saturday, 27 March, 2021, Amaechi emphasized the need for members and stakeholders to eschew animosity and strife and throw open the Membership Re-validation and Registration exercise to everyone desirous of joining the party.

The Minister’s statement was captured thus, “the victory we had at the supreme court was not a victory against the PDP. It was an internal APC matter …as angry as anyone would be, we must be ready to forgive ourselves and move on. So, register everybody.

So, anyone who wants to contest election under the APC should and must be allowed because by that judgement, we cannot stop anyone as a party”.

While in Ogu/Bolo Local Government Area, Amaechi emphasized the need for a harmonious and symbiotic relationship among party faithful to achieve the fair and just project of producing a Governor of Rivers State from the Riverine area in respect of the upland and riverine dichotomy. “it doesn’t matter if you are from upland or riverine, the most important thing is for everyone to come together and work to have a riverine Governor come 2023”, Amaechi said.

Eze lamented that the above view expressed by the Minister was grossly misconstrued by Sen. Magnus Abe, former Rivers South/East Senator, who misrepresented it to mean the pre-imposition of a guber candidate on the party ahead of the 2023 elections.

The party Chief who reserved comments on Abe’s balderdash said it would amount to a wasteful venture responding to the ignorance of a third party, a nosy-poker, and an intermeddler who has no business in progressives family, stressing that Abe’s membership of the All Progressives Congress is in abeyance until he formally renews his membership by revalidating in the ongoing nationwide membership drive which ended 31 March, 2021, unless a further extension is approved by the National Leadership of the party.

In Oyigbo, where the Minister was treated to a warm reception that elicited no mean awe and inspired deep feelings of emotion among party faithful, Hon. Chisom Dike, Lawmaker representing Eleme/Tai/Oyigbo Federal Constituency, led an army of constituents who were formerly of the Peoples Democratic Party (PDP), into the All Progressives Congress, with an ironclad assurance to further embark on a fishing expedition to harvest more souls for the party to complement the efforts of Dr. Gift Okere, and other leaders of the party in the local government.

To show the level of love that Rt. Hon. Dr. Chibuike Rotimi Amaechi the leader has for this brave lawmaker not minding his hectic tour of nine LGAs a day after his tour of Oyibo LGA in Rivers State still found out time to felicitate and witness the cutting of cake for the Birthday of Hon. Chisom Promise Dike. Not minding his busy schedules the Minister drove straight to Trsnscorp Hilton Abuja from the Airport to be with his friend and use the opportunity to commend him for the brave step he has taken by formally joining the progressive family and assured him of level playing ground during the nomination and election of party faithful come 2023.

By this act, the Hon. Minister has shown once again that he is a man that takes interest in the affairs and well-being of the people around him, the people of Rivers State and the nation at large.

The tour of Asari-Toru Local Government Area was no different experience as Chief Hon. Michael Ibinabo West, former Rivers Lawmaker and erstwhile Commissioner for Transport under Wike, led thousands of PDP folks into the progressives family, thereby making the job easier for Dr. Dawari George and Ojukaye Flag-Amachree. It was more like a carnival than a political gathering as Chief West led thousands of PDP faithful to the party. According to this new heavyweight of APC, “I told them that the Anointing of God has left the PDP and is now in APC,APC will take over Nigeria from National to Rivers State”.

Chief Isaac Wonwu, a political staunch, Labour Party heavyweight and serial guber candidate in Rivers State, and his crowd of supporters added colour to the event in Ikwerre Local Government Area, as dozens of decampees were received into the All Progressives Congress with thousands billed to join before the end of the Membership Re-validation and Registration exercise.

The tour of Etche Local Government Area was something else as the mammoth crowd that welcomed Amaechi was intimidating demonstrating that the Local Government and her people are tired of the administration of Governor Nyesom Wike who have ensured that none of the roads in this area are worked upon or any legacy project sited in the area.

With the massive defection that has so far rocked the Peoples Democratic Party, the party Chief said Gov. Wike and his umbrella party, seem to have gone berserk, having been thrown into a panicky mode with the caliber of chieftains that have left their fold with the visit of Amaechi to the state, as tipoff from a reliable source reveals that the Governor is making arrangements to send emissaries to some APC stalwarts to woo them with an undisclosed whooping sums into the Peoples Democratic Party in a bid to make up the loss suffered by the PDP.

Eze cautioned leaders of the APC in Rivers State to be wary of Gov. Wike’s cunning antecedents and never allow themselves to fall prey to his gimmicks, warning that an ounce of prevention is worth a pound of cure.

In all the local government areas he toured, Rt. Hon. Amaechi urged the people to use the ongoing party membership registration and revalidation exercise to reach further and expand the support base of the party, assuring that the party is ready to take back power in the State.