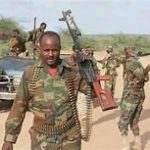 At least five al-Shabaab militants were killed and several others were wounded when the Somali army conducted an operation in the southwestern region of Bay, an army official said on Saturday.

The operation, launched by the Somali National Army backed by regional paramilitary forces, took place outside the strategic town of Diinsoor, some 369 kilometrs (229 miles) southwest of the capital Mogadishu.

Ibrahim Adan, Somali army operational commander in the area, told media that they attacked an al-Shabaab base on the outskirts of Diinsoor while the Somali-based al-Qaeda affiliated group were planning attacks against the government forces, killing at least five militants, including two senior officials, and wounding several others.

Eyewitness in Diinsoor told Anadolu Agency over the phone that they heard fierce gunfight between the Somali army and al-Shabaab militants.

According to a statement issued by the ministry, the airstrikes took place in the vicinity of Ma’moodow, 410 km (254 mi) from Mogadishu. (Anadolu Agency)