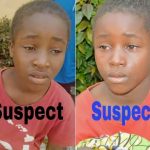 The Ondo State Police Command has arrested a ten year old girl, Suliya Abubakar, for Allegedly killing her 20 month old step-brother by throwing him inside a well. 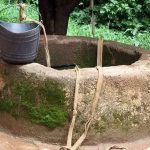 The tragic incident occured at the Iwodo area, behind Central Mosque, Akure, Ondo State.
While parading the suspect yesterday in Akure, The state Commissioner of police, Bolaji Salami, stated that the girl threw the baby, Usman Abubakar into the well, out of annoyance that her father was showing more care for her brother. Suliya initially lied to her parents that Usman has been kidnapped by an unknown woman wearing hijab.  But after thorough investigation, his corpse was discovered in a well located near to their house. She later confessed that she was the one who threw him inside the well out of jealousy because their father, Abubakar, loves him more than her.

Suliya told newsmen that on the day of the incident, Usman had faeces on his body so she was asked to fetch water and wash the faeces for him. After she went out to a nearby well, Usman followed her and because she was angry, she decided to throw him inside the well. She later informed her father that a woman with hijab has kidnapped Usman. While on their way to police station, the father asked her to indict her mother as the one who kidnapped Usman. But she can’t lie against her mother so she told them the truth about what happened.

“I am the one that threw Usman inside well and I don’t know that he will die,” she said.

Hmmm! wonders shall never end. You transferred the hatred u have on your wife to the daughter and it was so open that the little girl knew it. It is quite a pity that she has the same wicked hearth that u have. Now you have seen the result. I wish you can repent and have a changed heart for better running of your family & heaven at last.

lesson for all parents and guardians. it wasn’t the fault of the little girl she was just overwhelmed by circumstances around her hence she acted through overpowering of evil emotions.

Nothing Surprise me again in Nigeria. Blame the father for everything. The father should be arrested for trying to lure his daughter to give false information to the police.

For the fact that the father was trying to convince her to lie against her mother shows that the whole problem is from the father. He divided his family with hatred and this is the consequences of his actions. The man should Also be arrested. That’s my take.