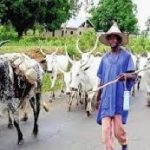 The Yoruba Activist, chief Sunday Igboho has again stormed Abeokuta to chase out killer herdsmen that has been disturbing the peace of the communities in the State.

Sunday Igboho who was welcomed by a multitude of people who gathered around him while he walked majestically in clothes full of charms to chase out the bad eggs among the Fulani Herders that has destroyed many farms and chased out local residents from their various settlements. 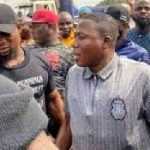 This has got Nigerians talking on social media, the majority of which has praised him for his activism and regarded him as the savior of the Yoruba race in the South West region of the Nigeria.

Recall that chief Sunday Igboho has said that he is going to visit the State few days ago after men in Military uniforms were seen escorting herdsmen to graze in villages located in Yewa North Local Government Area of Ogun State, while they brutalized some residents in defense of the herdsmen.

Sunday Igboho has successfully chased out this killer herdsmen from Ibarapa and Igangan communities of Oyo State, who has been causing havoc to the life and properties of local farmers for years in these communities.

It is unfortunate that the security of lives and properties in the country has become a laughingstock that it is now being controlled by individuals with spiritual powers such as Chief Sunday Igboho, instead of the constituted authorities that are meant to carry out such a task.
Banditry, kidnapping, insurgency have become rampant in the country, people can not travel peacefully again without the fear of being attacked by bandits or kidnappers. Government at all levels need to intensify efforts at stopping these people from disturbing the peace of people in The Country.

The Yoruba rights activist, Sunday Adeyemo (a.k.a. Sunday Igboho), yesterday, stormed Ogun State, insisting that killer-herdsmen must vacate Yorubaland.
Igboho, alongside his supporters, arrived in Abeokuta, the state capital and immediately proceeded to some troubled areas in Yewaland in Ogun West Senatorial District. 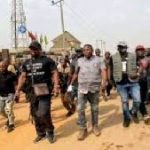 His visit was in continuation of his campaign against the marauding herdsmen in the South-West.

He had recently displaced some Fulani herdsmen in Igangan, Oyo State, a development, which had attracted knocks and kudos nationwide.

Speaking with journalists, he insisted that Fulani herdsmen who engage in killing and kidnapping must vacate the region for peace to reign.

He said: “We observe there is an injustice from the herdsmen because they are close to the Federal Government. Any Fulani herdsman who engages in kidnapping should be flushed out.

“Not only Igangan, but we are also going to visit all Yorubaland. I am going to Yewa because that is where the Fulani are wreaking havoc.