As the news about Prophet TB Joshua is sinking in that indeed the great man of God is dead, we just got a report that there was a man who doesn’t call himself a prophet but a seer, who spoke about the death of Prophet TB Joshua.

According to Pararan mock news, this seer was so specific. He prophecied about this on the 10th of may. 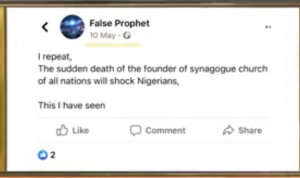 Below is the video on the matter;

See also  Shortly After This Igbo Man Converted To Islam, See What He Did And How People Reacted