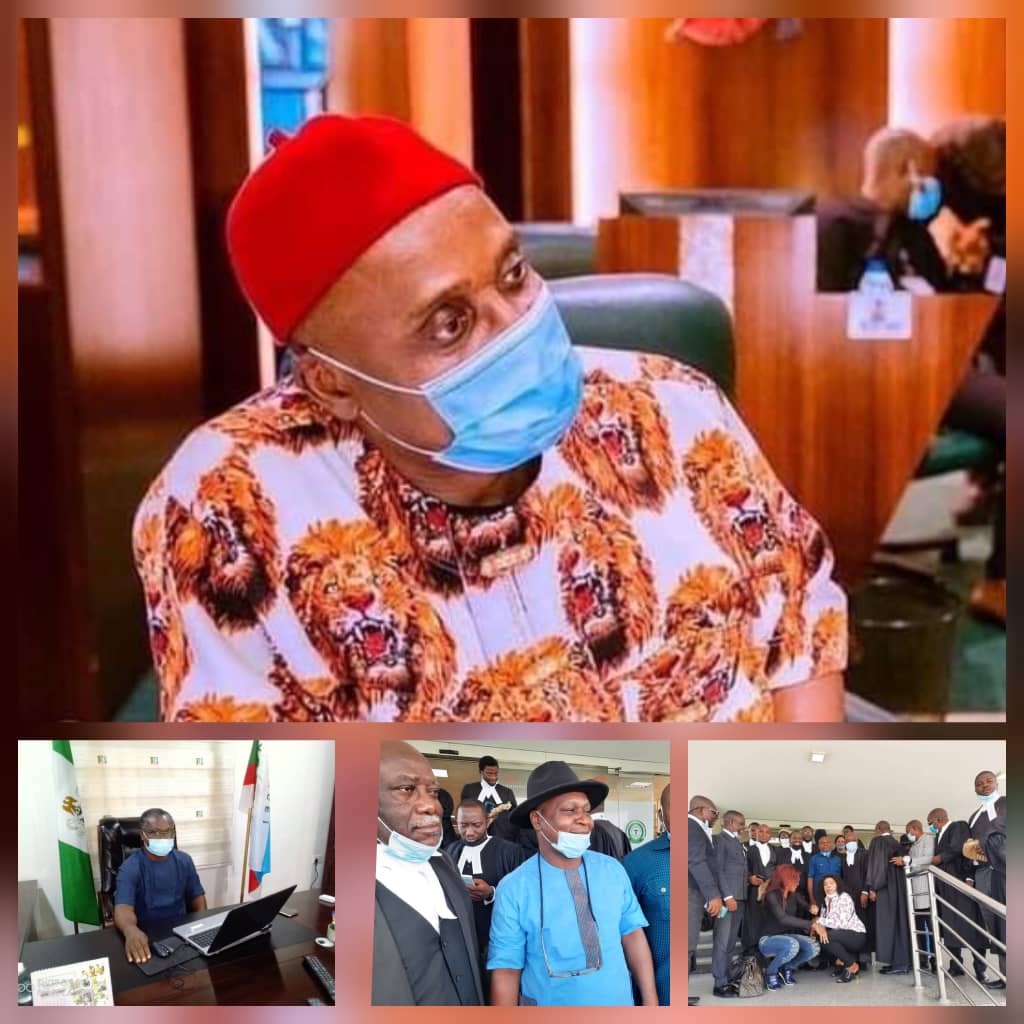 Rivers APC Crisis: Eze congratulates party as Supreme Court thrashes Aguma’s appeal… Advice Wike, Abe and co-travellers to abandon devious politicking, allow APC deliver Rivers from misgovernance… Counsels Abe and his misguided cohorts to learn from Aguma and leave APC peacefully or be expelled accordingly as the damage they have done to the party is irreparable..

The political atmosphere in Rivers State appears charged, as the State Chapter of the ruling All Progressives Congress (APC) was thrown into a joyous mood following the dispensation of all appeals lodged against the party at the apex Court.

Recall that the party has been in what appears to be a near-unending crisis instigated by a group of unconscious, conciensceless and cantankerous mortals led by an avowed dissident element, Senator Magnus Ngei Abe, a former Rivers South/East Senator, whose brazen disregard for morality, and public good clearly points to his lack of proper filial piety and good cognitive orientation.

Reacting to the Supreme Court rulings, erstwhile National Publicity Secretary of the defunct New Peoples Democratic (nPDP) and chieftain of the All Progressives Congress, Chief Eze Chukwuemeka Eze, said the judgement clearly represents an appreciable degree of sensitive regard for fairness, justice and respect for the rule of law which have suffered incredible defeats before the Rivers State Judiciary, hoodwinked by the canker claws of Gov. Nyesom Wike.

Eze notes with gladness that all the judgements against Rivers state APC by Justice Omeriji and other judges were thrown out by the supreme court thereby exposing the Rivers State Judiciary as a political supermarket that is managed by the State government. With these rulings, the Rivers State Judiciary should purge herself of this unwarranted and disgraceful image it has earned and distance herself from unnecessary politicking of issues involving APC in the state forthwith and adhere to the counsel of the supreme court about the kind of judgements they give in Rivers State.

READ  2023: Vilifying Amaechi for Having an Opinion is Arrant Ignorance as Zoning Rivers APC Guber Slot to the Riverine is Fair, Equitable ~ Eze

With party men and people of goodwill clinging glasses and picking blueberries at the pools over the verdicts, Chief Eze said Justice has manifestly been seen to be done on the matters, stressing that the Supreme Court has laid to rest all speculations and uncertainties about the fate of the progressives party in the state and especially, the fortunes of Rivers people who have bore the brunt of the excruciating effects of the long judicial rigmaroles for which Senator Abe, Igo Aguma and their conspirators were responsible.

Similarly, in Dele Moses v Victor Giadom & 4 Ors. (SC.18/2020), the apex Court was of the candid opinion that the appeal was a mere academic exercise contrived to waste the judicious time of the Court and accordingly threw the appeal to the appropriate waste bin where it properly belongs.

In another Appeal brought by the All Progressives Congress (APC), the Supreme Court held that Congresses should not be restricted to only those who bought forms in 2018 as such restriction would prejudice eligible members of the party who wish to stand elections within the party.

By this ruling, Chief Eze said those who bought forms in 2018 may participate in the Congresses which will soon be conducted, if they wish to participate. However, having boycotted the ongoing membership drive of the party, Eze said such right will be waved because congresses are strictly for those who participated in the revalidation exercise and whose names are on the register of the party.

Furthermore, the party Chief expressed gladness over the ruling of the Court of Appeal, today, which granted Stay of Execution in the Order given by Justice Ben Whyte, which restrained the Rivers APC from participating in the ongoing nationwide membership registration and Revalidation Exercise.

On the exit of Hon. Igo Aguma, from the All Progressives Congress, Chief Eze said working for the opposition, Aguma and Abe have left the party for a long time ago however, he commended him for making his exit open, stressing that the duo have only succeeded in depriving Rivers people their chance of making the right choices of representatives at the parliament and other positions in government.

Commending the Supreme Court for helping to fumigate the APC against canker warms, caterpillars and rodents including flying, creeping, biting and sucking insects which have inflicted pains and agony on the larger society, Chief Eze congratulated the leadership, executive and members of the Rivers APC, for successfully sailing through the turbulent waters of legal mechanics and acrobatics and landing safely on Canaan Side.

Eze highlighted that as much as the party will be ready to reabsorb some of the repentant Abe’s men but warned those who may contemplate to toe the shameful route of Abe and Aguma again to sabotage the efforts of the party in future to reclaim the Brick House to have a rethink because the fasting and prayer embarked upon by the leader of the party, Rt. Hon. Chibuike Rotimi Amaechi and few of us from the beginning of this year will always bring shame and disgrace to such charlatans.

READ  I Have 55 Domestic Staffs In My House, Not One Of Them Gets Below N70K Per Month" - FFK Brags