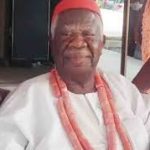 Owa-Alero, the community of Governor Ifeanyi Okowa of Delta continued to record nflux of sympathisers to the home of his father, Pa Arthur Okorie Okowa, who passed away on Thursday.

Among the sympathisers were the Speaker of the State House of Assembly, Chief Sheriff Oborevwori; some members of the State Executive Council including the Commissioner for Information, Mr. Charles Aniagwu.

In an interview with journalists, some of the personalities, including Sheriff Oborevwori, Aniagwu and the Chief Press Secretary to the governor, Mr Olisa Ifeajika, said that the massive turn out of sympathisers was a clear indication that late Pa Okowa affected lives positively, adding that his legacies were enviable and legendary.

While consoling the children of the deceased octogenarian and members of his family, they urged them to immortalise the late patriarch of the family by promoting the ideals that endeared him to humanity.

Specifically, the Commissioner for Information, Mr Aniagwu, said: “Papa’s death was a painful exit for those of us who were directly or remotely associated with him.

“But, we are consoled by the fact that the Bible has made us to understand that there is a time and season for everything; a time to be born and a time to die.

“I am also, consoled by the fact that Papa lived a very good life that positively touched the lives of many, including my family.

“When you look at the children of Papa, especially His Excellency, the Governor, you can see that he (Pa Okowa) was a man who brought up his children both in the fear of the Lord and in the love of society.

“So, he is going to be remembered for these many good things that he had done both through his children and directly. And as a community leader, he has also had cause to make a whole lot of positive difference in the lives of people in his immediate community and environs.”

On his part, the CPS, Mr. Ifeajika, paid glowing tribute to Pa Okowa, saying: “He lived very well. We are all witnesses to the testimonies about his life; even when he was widowed at a young age, he wasn’t discouraged; he continued and raised his children responsibly.

“He was a good Christian of the Anglican faith and a community leader.

“For the life he lived, he touched lives, he left good legacies. The governor is one gentle man everybody wants to associate with, and obviously, he (the governor) must have gotten that quality from his father.

“Of course, you are aware that he was a teacher of note. Our prayer is that papa will rest peacefully in the bosom of the Lord.”

As at 5 p.m. on Saturday, no fewer than 600 sympathisers had signed the condolence register at the home of the deceased octogenarian. where they wrote glowingly on the achievements of Pa Okowa, and prayed God to grant his soul eternal rest.