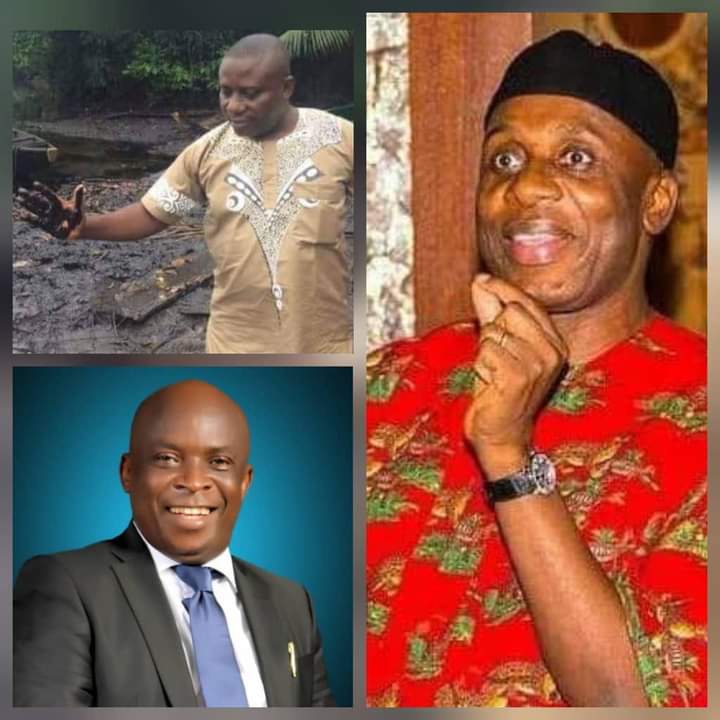 Ogoni Clean-Up Exercise, A Reality As Buhari Appoints Nwielaghi as HYPREB BOT Chairman, Akpobari, Feyi & others Into the Governing Council of HYPREB Board…

Following the sincerity and unwavering commitment displayed by the President Mohammadu Buhari-led Federal Government towards ensuring an effective implementation of the United Nations Environment Programme (UNEP) Report on Ogoni, a foundation member and chieftain of the All Progressives Congress (APC), Chief Eze Chukwuemeka Eze, said the remediation work is yielding very significant result, especially in restoring the badly damaged environment to a safer and globally accepted standard.

Reacting to the inauguration of the second Governing Council of Hydrocarbon Pollution Remediation Project (HYPREP) and Board of Trustees of Ogoni Trust Fund, in Abuja, by the Secretary to Government of the Federation, Mr. Boss Mustapha, on behalf of President Mohammadu Buhari, Chief Eze expressed delight that the APC led government has continued to stay true to its promise of restoring a healthy environment to the people of Ogoni through the clean up exercise.

Recall that the Ogoni remediation project had suffered neglect under the corrupt system of administration operated by the former PDP government which was warped by greedy red tape and unnecessary executive bureaucracies.

In a statement made available to media houses, the erstwhile National Publicity Secretary of the defunct New Peoples Democratic Party (nPDP), commended President Mohammadu Buhari, for the appointment of some proud sons of Rivers State into the Governing Council of HYPREP and Board of Trustees of Ogoni Trust Fund.

Eze was delighted of the appointment of an extraordinary son of Rivers State, Dr. Michael Nwielaghi as Chairman, Board of Trustees of Ogoni Trust Fund. Congratulating him and urging him to ensure that the vision of the Board is carried out for the general benefit of our people.

Eze postulated that other great sons of Rivers State appointed as members of the Board of Trustees BOT include Emma Deeyah, Bebe Okpabi and Adokiye Ikpoki.

Other members of the BOT are Dr. (Mrs.) Timi Agari, Mrs. Pamela Esiri, Israel Kayode, Emen Okon. While UNEP will serve as observer of the Board, Project Cordinator of HYPREP will serve as Secretary.

Speaking on behalf of the President at the inauguration in Abuja, Boss Mustapha said it is time to rejig the agency for enhanced structured and focused and focused delivery of the clean up project.

Furthermore, Mr. Boss explained that the United Nations Environment Programme Project (UNEP) Report was implemented for the benefits of Ogoni people, adding that the remediation of polluted land is progressing in various sites.

“We have carefully and painstakingly considered your backgrounds, profiles and competencies in affording you the opportunity to serve in these offices, and see your appointment as patriotic national duty”, Mr. Mustapha added.

Describing Nwielaghi, Feyi and Akpobari as men of proven competence in public service with standing records of rare intelligence and mastery in their various fields, Chief Eze described their appointments as a display of strict adherence to meritocracy by the federal government, which according to him, is good for timely results of set objectives.

Eze commended the Minister of Transportation, Rt. Hon. Chibuike Amaechi, for ensuring that the Ogonis are always included in the scheme of things, stressing that bringing competent Ogoni people into the administration of relevant organs in the remediation work gives the people a sense of participation in the clean up exercise which he said is the biggest, most wide-ranging and long term to be carried out in the world.

Similarly, the party Chief hailed the Minister of Environment, Dr. Mohammad Abubakar, for his good efforts in ensuring that the clean up project complies with the terms of the 2011 UNEP Report on the environmental assessment of sites polluted by oil exploration activities in Ogoni land, and meets the globally established and recognized standard for oil spill clean up exercises.

Eze called on the Ogonis and the good people of Rivers State to continue to support the administration of President Mohammadu Buhari and the All Progressives Congress, adding that the Minister of Transportation, Rt. Hon. Chibuike Amaechi, will continually ensure that Rivers people and indeed, each part of the country gets a fair share of democratic dividends under the current administration.

See also  NDDC is for all Niger Deltans, Says Akwa