But this beautiful experience is about to be scrapped out by the Nigerian house of representatives.

The bill to discontinue the National Youth Service Corp has passed the first reading in the floor of the  Nigerian House of representatives.

News has it that, the Hon. Awaji-Inombek Abiante, who is representing Opobo/Nkoro Federal Constituency was the one who sponsored the bill to scrap the scheme as he cited insecurity in the country as the reason.

“Public and private agencies/departments are no longer able to recruit able and qualified Nigerian youths, as they rely heavily on the availability of corps members who are not being well remunerated and then they discard them with impunity at the end of the service year without any hope to employ them;

“Due to insecurity across the country, the National Youth Service Corps management now give considerations to posting corps members to their geopolitical zone, and this is defeating one of the objectives of setting up the service corps, i.e. developing common ties among the Nigerian youths and promote national unity and integration.”

The bill has already scaled through the first reading as members of the House of Rep are still debating if they should discontinue the NYSC scheme.

The National Youth Service Corp is a one year service scheme that is mandatory for graduates of Nigeria tertiary institutions who falls under the age of 30.

Statutorily under the scheme, young graduates from the country southern region would get posted to the Northern region and vice versa.

They would then receive three weeks compulsory para-military training before they get posted to schools, hospitals, banks and other private and public establishments.

So far, insecurity issues in the country is beginning to affect the scheme as report of cases of Corp members being kidnapped and banditry threats is on the increase.

What would happen to the bill to scrap NYSC?

Though It’s not so clear, as the bill just only passed the first reading.

For a bill to become a law in Nigeria, it would need to scale through three readings in the house, and it would go through committee reading.

They would later pass it to the upper legislative house, for the senate to agree to it before the President would finally sign it into law.

This is actually not the first time of debating online and offline if this NYSC programme is still relevant to integrate Nigerian youths in the face of insecurity happenings and other issues.

Meanwhile, here are some Nigerians on twitter queuing behind the scrapping of the NYSC scheme. 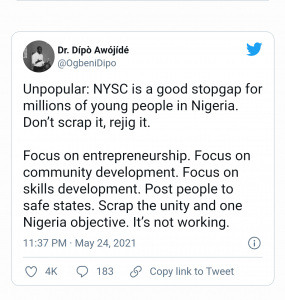 It was during the military regime of General Yakubu Gowon that the NYSC on May 22, 1973, under Decree No. 24 of 1973 was established as a way to reconcile and reintegrate Nigerians after the civil war that happened between July 6, 1967 and January 15, 1970.

Some other persons dont want the government to discontinue the programme because of some benefits they believe it brings for young people across the country. 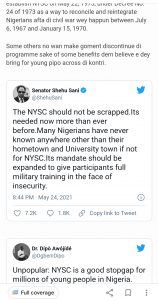