About 48 hours after Boko Haram/Islamic States West Province (ISWAP) terrorists repelled an attack by the military, killing at least 20 soldiers in Malari, Borno State, the Nigerian army has yet to officially speak on the incident.

Its been gathered that the soldiers were on patrol to clear some Boko Haram elements in the area following credible intelligence when they were ambushed by the insurgents. 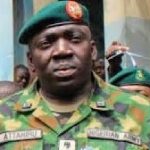 A senior military officer said the gunmen subsequently engaged the troops with an overwhelming firepower, killing about 20 soldiers.

The terrorists also destroyed about three operational vehicles of the Nigerian army.

The attack comes few days after six soldiers were killed in an ambush along Goniri-Gorigi Road while returning from a clearance operation.

Authorities of the Nigeria army have however been silent on both incidents.

“They have contacted their families as usual, they will be buried in a cemetery here in Maiduguri during the week,” a source told SaharaReporters.

Nigerian army has repeatedly claimed that the insurgency has been largely defeated and frequently underplays any losses.

In the past months, soldiers have been targeted by the insurgents, waiting in ambush for them.

The Boko Haram insurgency has caused over 30,000 deaths and displaced millions of individuals, mainly in Adamawa, Borno and Yobe states.

The terror group wants an Islamic caliphate in northern Nigeria.

See also  We Igbos are not murderers— Senator Okorocha warns