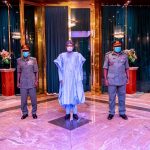 The new service chiefs have arrived Maiduguri, the Borno State capital with the view to meet with critical stakeholders to brainstorm on how to tackle insurgency in the theatre of war.

The Chief of Defence Staff, Major General Leo Irabor led the service chiefs to the Headquarters of Air Task Force of Operation Lafiya Dole in Maiduguri at about 1:30pm on Sunday.

A top security source who confided in our correspondent posited that the service chiefs along with the other stakeholders are expected to brainstorm and re-strategise in order to come up with an approach that will ensure lasting peace in the region.

The Chief of Defence Staff, Lucky Irabor, on Sunday paid his first operational visit to the Theatre Command in Maiduguri.

He was accompanied by the Chief of Army Staff, Ibrahim Attahiru, Chief of Air Staff, Isiaka Amao and the Chief of Naval Staff, Awwal Gambo.

Mr Irabor, a major-general, along with his team, was received by Farouq Yahaya, Theatre Commander, Operation Lafiya Dole; Abdul Khalifa, the General Officer Commanding, 7 Division of the Nigerian Army and other principal staff officers of the Military Command and Control Centre at the Headquarters of the Air Task Force.

of Nigeria (NAN), in an interview, that the CDS would be meeting with the other Service Chiefs, Theatre Commander, Operation Lafiya Dole, Chiefs of Training and Operations from the Defence Headquarters, Army, Navy, Air Force and other field commanders, where they would be briefed on recent operations in the theatre.

Mr Khalifa said that the service chiefs would also pay courtesy visits to the Shehu of Borno, Abubakar Ibn-Garbai and Governor Babagana Zulum of Borno.