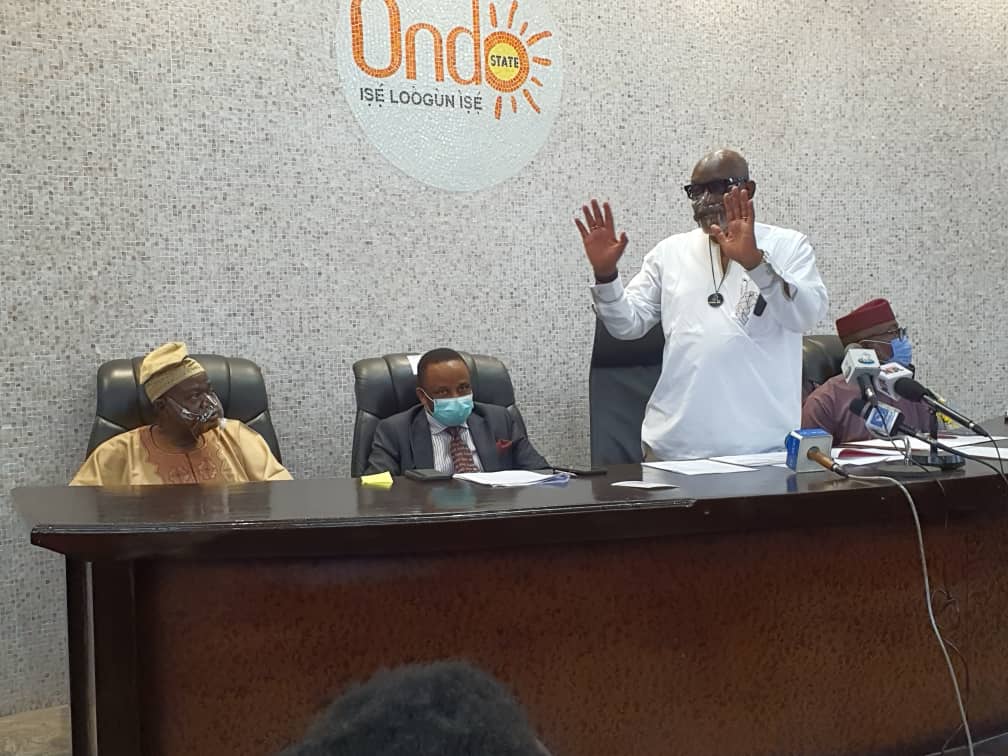 The Governor of Ondo State, Arakunrin Oluwarotimi Akeredolu, says the Niger Delta Development Commission, NDDC, is in a new era of diversification and sustainable economic development.

Governor Akeredolu stated this today when the NDDC Interim Administrator, Mr. Efiong Akwa, led a team of the Commission’s management to pay him a courtesy visit at the Government House in Akure.

Akeredolu re-stated the position of other key Niger Delta stakeholders that the objective of the NDDC should be to drive sustainable development, commending the Commission for taking out time to engage critical stakeholders.

The governor said that the economic potentials in his state were diverse, urging the NDDC to partner with the government in making the needed investments. He remarked: “You can invest in our bitumen and cassava industry. This is important because the reliance on oil is waning. We can also partner to invest in tourism. There are many areas where we can work together.”

Akeredolu commended the NDDC for executing that the 132/33kv sub station that would provide electricity for over 2,000 communities in the southern part of the state. He said: “It is good that you are visiting the electricity project. It so important to us. We want light in the south of the state. We want this project to be commissioned. We have done some electricity projects on our own but it is not enough. Our people should know that light is coming. It has taken some time. But I assure you, light is coming.”

See also  HOW TO STAY HAPPY IN LIFE.

The governor regretted that the Ugbo-Arogbo Bridge and some other projects in the state were abandoned and urged the NDDC to work towards completing all its projects. He, however, expressed appreciation to the Commission for donating waste disposal trucks to the state government, observing that it would go a long way in keeping the environment clean.

In his address, the NDDC Chief Executive Officer, Mr. Akwa, said it was important to engage and consult stakeholders of the Niger Delta and commended Governor Akeredolu’s commitment to developing the state.

He told the governor: “This visit is part of our ongoing engagement with important stakeholders of the Niger Delta region. When President Muhammadu Buhari, appointed me as Interim Administrator of the NDDC in December, he charged me to ensure, as a matter of urgency, that we rebuild the relationship between the Commission and its stakeholders.

“This is important because partnership is key to development. It rekindles our long-held tradition of brotherhood. It reaffirms that we are our brother’s keeper. This is who we have always been as Niger Deltans.”

Akwa noted that partnership was one of the key prescriptions of the United Nations’ Sustainable Development Goals, SDGs, to facilitate the rapid, even and sustainable development of the Niger Delta region.

According to him: “It advocates for a shared vision, shared responsibility, shared commitment, as well as shared budgeting process and implementation of development initiatives. This way, we are able to do far more, with far less funds, than if we were duplicating projects and working alone.

“That was the spirit in fashioning a Master Plan for the Niger Delta, the vision of our shared allegiance to this great region. After so many years of neglect, it is important that, together, we do far more for our people. It is important that we do more for a region which has provided the bulk of Nigeria’s wealth, and accounted for our rise in the comity of nations.”

Akwa stressed the importance of revitalising the Commission’s Presidential Advisory Council, to ensure that NDDC works in harmony with our State Governors, as well as within the vision of each state, stating: “The past practice where the Commission undertook projects and programmes in the states, without first building a working coalition with the states governments, to integrate our plans, policies, projects and programmes into the state government’s overall master plan, will no longer hold. Because the state governments know more where the needs are, what the needs are, and how, working together, we can best bring development to our people.

“Our visit is both to acknowledge your strategic importance to Niger Delta development, as well as to seek ways in which we can forge a stronger alliance with the government and people of Ondo State. We offer both our hands and seek embrace, so that, together, we can build a region of which we can be eminently proud.

“We are determined to continue to make a difference in the Niger Delta region in general, and in Ondo State, in particular. We remain committed to providing projects and programmes of enduring quality. To build the Niger Delta is to build ourselves. To make it a better place is to give our people a better place. And that is what we are determined to do.”

The Interim Administrator later presented keys to three waste disposal trucks to the Ondo State Government to assist it in its efforts to improve the sanitary conditions in the state. He said that the NDDC had also donated hepatitis vaccines and medical equipment to the state.