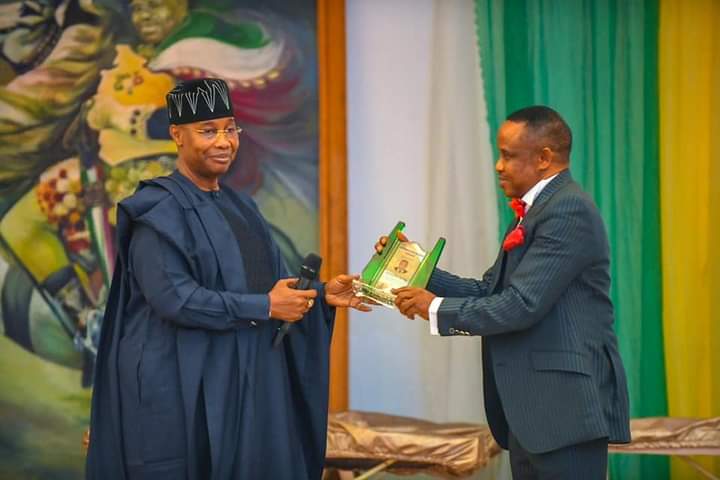 Interim Administrator of the Niger Delta Delevopment Commission, NDDC, Dr. Efiong Akwa, has been honoured with a distinguished service award by the Nigeria Police Force, “in recognition of his sterling leadership qualities and partnership with security agencies to promote and sustain peace in the Niger Delta region.”

The award, which took place during a state banquet hosted by Akwa Ibom State Governor, Mr. Udom Emmanuel, at Banquet Hall, Government House, Uyo, on Wednesday, as part of a two-day conference and retreat for police officers, was presented by the Inspector General of Police, Mr. Usman Alkali Baba.

Mr. Baba, who identified the NDDC as a critical partner to securing peace in the Niger Delta and boosting regional development, expressed appreciation to the Commission for assisting the Nigeria Police Force with working tools and facilities for efficient discharge of security service to Nigeria. 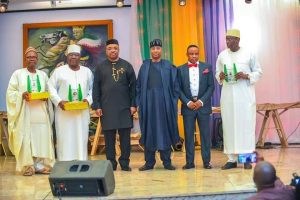 The two-day conference and retreat in Akwa Ibom State is the second edition of the Conference and Retreat for Senior Police Officers, organised by the Nigeria Police Force to drive a policing vision that would afford the police leadership the opportunity to identify and set measurable crime fighting agenda for the force.

The Inspector General of Police, who pledged to provide security for all Nigerians to go about their businesses, said: “We on our part are ready, willing and able to provide the required security to Nigerians so long as we have tools to work.”

In his response, Dr. Akwa stated that NDDC was obligated by its mandate to work with stakeholders to ensure the enabling environment for sustainable regional development, adding that the Commission remained committed to discharging its mandate.

He said: “NDDC will continue to work with security agencies to promote peace and security in the Niger Delta, because development can be occurred in an environment that is peaceful and secure, one that allows every citizen and all businesses to go about their daily pursuits.”

He added: “The new NDDC is committed to offering the people of the Niger Delta a better return on their cooperation with and support for the Commission, to be able to do its work. And we acknowledge the support from President Muhammadu Buhari and the Minister of Niger Delta Affairs, Senator Godswill Akpabio, in ensuring that we are able to offer better service to the people.”