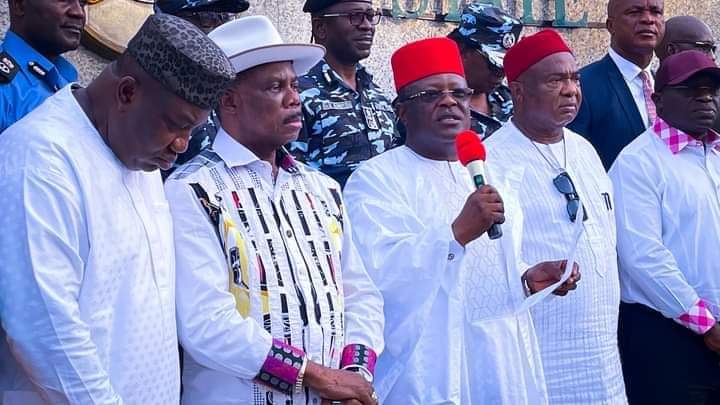 Insecurity: Eze describes the Attacks on Two APC States of Ebonyi, & Imo as provocative, condemnable, unacceptable, an Act Of Sabotage Against Ndi Igbo and the APC Led FG… Ebubeagu In The East Is A Welcome Development… Describes Umahi as a Leader that leads By Example …Urges Nigerians to Unite and collectively build a united, virile and egalitarian Nigeria

Erstwhile National Publicity Secretary of the defunct New Peoples Democratic Party (nPDP) and chieftain of the All Progressives Congress, Chief Eze Chukwuemeka Eze, has condemned in very strong terms, the rising spate of killings and wanton destruction in parts of the country, which is now progressively blossoming into an overwhelming security challenge for the country.

Reacting to the worrisome trend of rampaging bandits and marauders, who have continued to operate and unleash mayhem on citizens and residents unfettered especially, the recent onslaught against defenceless citizens and natives of Nkalaha, Obegu, Amaezu and Umuhuali communities in Ebonyi State, in the wee hours of Monday, March 29, 2021, which resulted in a scene of massive bloodbath; and the flagrantly obscene and provocative attacks on lawmen on duty in various security facilities in Imo State, Chief Eze admitted that the country has been enmeshed in a seemingly messy security challenge and called for urgent and drastic measures to restore calm.

In a statement made available to media houses in Port Harcourt, Chief Eze said the security atmosphere in Nigeria is obviously pregnant, and if caution is thrown to the winds, it may be delivered of a crisis capable of shaking the very foundation of the biggest black nation in the world.

He said the attack on the the two APC controlled States in the South South and East regions, (Imo and Ebonyi States) is unacceptable, provocative, condemnable as it has an undertone as it could be a likely ploy by enemies of the country to embarrass the APC led Federal Government and to scuttle genuine efforts by the progressives party to sweep the entire old Eastern region in the 2023 elections.

Eze reiterated that opponents of APC have been so uncomfortable with the defection of Governor Umahi to APC from PDP and ready to do anything to make Ebonyi State and in extension the entire South East region unsecured and ungovernable but if I still know Governor David Nweze Umahi very well this is an excerise in futility as he will always find a way out of this madness.

See also  Nsirim: The Ranting of an Uninformed Informant (Commissioner)

This notwithstanding, Eze noted with nostalgia that there was no such attacks and banditry when Governor Umahi was in PDP showing the desperation and wickedness of opposition political parties and enemies of Ndi-Igbo to turn the SE zone into a war zone just because Governor Umahi resolved to take the Zone to the Centre thereby exposing to the entire world the wrongs that PDP has visited Ndi-Igbo with during her 16 years of misguided leadership of this country.

Eze further postulated that these agents of destruction are also not happy of Umahi joining APC in appreciation of the great feats of President Buhari in the Zone may have resolved that the best option is to destroy the South East zone with hope that will make Nigerians vote back PDP that ruined this country within her sixteen years of misguided leadership of this country. We are waiting for them.

Eze maintained that Governors Umahi and Uzodinma are key and crucial members of APC and none of these sponsorship of attacks will deter them or more of the Governors in the South East and South South from defecting to APC before the end of the year.

Commending the response of the South/East Governors Forum, led by the Governor of Ebonyi State, Engr. Dave Umahi, Chief Eze threw his weight behind the stern resolve of the forum to take responsibility by establishing a security outfit for the region, ‘Ebube Agu’, to coordinate activities of vigilante groups and complement the efforts of security agencies in containing the overwhelming security challenges in the region, stressing that the situation calls for a severe measure.

Describing as strategic, the Southeast security summit held on Sunday, April 11, 2021 in Owerri, the Imo State capital, the party stalwart said the outcome of the summit offers a catalyst for stability for the troubled security situation in the country, particularly the Southeast, noting that there is no better time than now for the Nigerian Government to heed the clamour for State Police.

Eze said the responsiveness of the Southeast Governors’ Forum to the porous security architecture especially, the resolve to deploy resources and provide necessary logistics for security agencies to tackle crimes and criminality and restore law and order, is worth commending, as security of lives and properties of citizens remain the chief duty of government.

See also  CLARION CALL; This Is The Time Of Amaechi By Douglas Waserite Dodiyi-Manuel

Excerpts from the communique issued by the forum at the end of the Security Summit in Owerri reads:

The forum “…strongly and unequivocally condemn terrorism and banditry in any part of Nigeria, particularly in the South East. The meeting strongly condemns the burning of police stations, violent attacks on custodial centers with the unlawful release of inmates, and the killings including security personnel, natives/ farmers and headsmen.

…the political leadership in the Southeast has resolved to bring together all the arsenals at their command, as one united zone, to fight and flush out criminals and terrorists from the zone.

…the summit resolved that to achieve this, there is a need to galvanize all the relevant stakeholders in the southeast,
the political class, the business community, the bureaucrats and the intelligentsia to provide all necessary support to security operatives in the five southeast states to ensure total success in the fight against criminality in the zone.

…that to fast-track crime-busting in the southeast, the heads of security agencies have been mandated to draw up a comprehensive list of their logistics and material needs for sustainable success in the fight against criminality, for the immediate provision by the leadership of the southeast.

…that a committee made up of security personnel, government officials and relevant stakeholders are to be set up to coordinate and monitor the implementation of the southeast joint security platform.

…the meeting resolved to maintain a joint security vigilante for the South East otherwise known as Ebubeagu Joint Security Network.

… that military policing in the South East should be adequately funded and become effective. …that open grazing has been banned and security agencies should implement the ban. …Summit encouraged a peaceful coexistence of
farmers and headers to allow Governors to succeed in the fight against criminality”.

Eze urged the Governors to match words with action, noting that no meaningful development can take place in a society embroiled in a manifest situation of lawlessness, stressing that extraordinary measures must be considered in critical times such as this, to guard against crimes and sabotages, including attacks on security facilities for the purpose of aiding the escape from custody, of inmates.

Although the strategies adopted are worth commending, the party stalwart said the Southeast Governors must collaborate with their various State Houses of Assembly in order to formally frame a law recognising and establishing the Security outfit in a bid to regulate and add legitimacy to the operations of the security outfit, ‘Ebube Agu’.

Furthermore, Eze harped on the need for the Governors to liaise with relevant Federal Government Agencies so as to obtain necessary approvals to allow the Southeast security unit to bear arms to be able to confront bandits and other criminal groups operating in and around the region.

Describing the incidence that happened recently in a Correctional facility in Imo State, a few days ago , and the gory violence that followed, as embarrassing and unfortunate, the party stalwart emphasized the need for a review of the nation’s security architecture to curtail a possible recurrence.

“A proper investigation into the horrible incident that led to the escape of over 1,800 inmates from a Correctional facility in Imo state, must be carried out, as treating a refraction of such magnitude with kids glove will definitely metamorphose into a violent crisis that may render the country and her people an endangered specie. Perpetrators must be prosecuted accordingly, to serve as deterrence to those who may be nurturing similar crimes”. Eze noted.

Frowning at the restive acts of the rampaging bandits and marauders which amount to a gross rebellion against the conventions of polite society, the party stalwart said the height of their operations clearly contradict every recognized standards of civilized behavior, ethics and decorum, and must not be allowed to parade with impunity.

Eze called on Nigerians to continue to support security agencies in the fight against crime and criminality in the country, stressing that Nigeria will surely overcome her trying times, admonishing that a united, virile Nigeria is possible when citizens perceive the project of nation building as a shared responsibility and religiously perform their moral and legal obligations in all spheres.