A Facebook user has taken to the platform to narrate how the kindness of a person landed him in trouble in Abuja.

According to user, Bashiru Adamu, a driver decided to help someone he knows by giving him a lift to his destination. However, as they rode and he asked the man where he would drop, there was no response and it was later discovered that the man had died.

After the good Samaritan took the corpse to the police station, he was detained. The Facebook user wrote,

Very sad experience within my community today… A car owner decided to give a lift to someone he knows. A ride that’s not up to 20 minutes. On getting to where the guy will drop he asked the guy where will you drop… Unfortunately, the guy couldn’t answer him because he was dead. I went to the car, and I saw the guy it was a like movie, I felt like we could just call him and he will answer us.

He is currently detained in the police station where he took the dead body too 😭
People are going through a lot, let’s be a bit more kind. Never mock anyone… The old, poor, rich or sick. Let’s not mock anyone. Life is fickle and can happen to any one of us regardless of our faith. 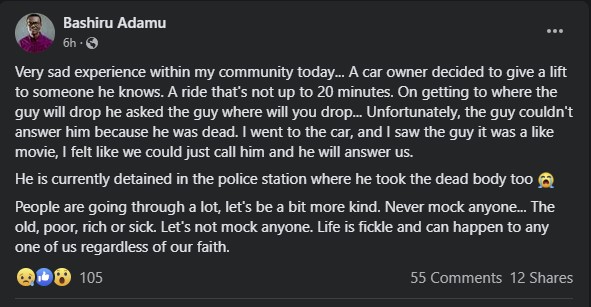 See also  #BellaNaijaWeddings Weekly: It's The Perfect Time To Catch Up on all The Features From This Week