Below Are The Rules of football when we were kids 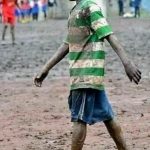 1. The fat kid was always the goalkeeper
2.The owner of the ball decides who plays
3. If you didn’t participate in repairing the ball you were given a match ban
4. The guy who’s never picked was to fetch the ball from the trees or bush when it got stuck, under the car or tunnel to play in the next game
5. When the owner of the ball got annoyed, game over
6. When you hit your toes against a stone and you notice blood, you quickly cover the area of injury with sand as a form of first aid and play continues
7. You can’t dribble the owner too much, this may lead him to stop the game by taking away his ball.
8. No matter how many goals you scored, the winner would be determined by the last team to score
9.No offsides.
10.There is no referee.
11.There is fault only if the fault is serious .
12.The 2 best players can not play in the same team so everyone chooses their players.
13.If you are chosen last it is a humiliation and you will remain in defense.
14.If there is a penalty the goalkeeper is replaced by the best player of the team.
15.The best player on the field is always in the same team as the owner of the ball.
16.To distinguish the teams, one of the teams pulls off their shirts .
17.There is always a house where when the ball fell there, we knew that the game was over. so be careful !!
18.Game over when its dark and we can barley see the ball, we all disperse in groups teasing one another until we get home to face another punishment from our parents.

See also  See What Happened To This Girl, On The Day I Wrote Biology WAEC!!!