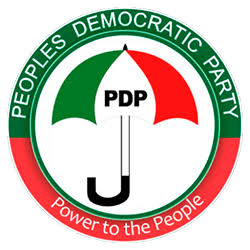 Ebonyi: Your orchestrated smear campaign and series of Blackmails against Umahi and members of his family is sign of frustration and wickedness, Eze tells PDP…. Urges Umahi to ignore PDP factory of falsehood… Commends Elechi, Ogbuoji and other stakeholders for uniting with UMAHI to usher in a vibrant, virile and cohesive APC in South East.

Perturbed by the bizzare timidity and callous indifference of the Peoples Democratic Party (PDP), to the massive wind of growth and development sweeping across every nook and cranny in Ebonyi State, chieftain of the All Progressives Congress (APC) and erstwhile National Publicity Secretary of the defunct New Peoples Democratic Party (nPDP), Chief Eze Chukwuemeka Eze, has expressed concern over the party’s uneasy state of blended uncertainty, palpable apprehension and harshly reproachful ill-will towards the sterling leadership, outstanding performance and rising profile of Gov. Dave Umahi in public service and the politics of Nigeria.

Reacting to the spurious and unsubstantiated allegation of fraud bothering on shady contract deals and illicit financial flows against Gov. Umahi and Brass Engineering & Construction Nig. Ltd., a company which previously enjoyed the expertise and competence of the Governor when he held sway as Chairman and Chief Executive Officer (CEO), including the groundless allegation that the brother in-law of the Governor was caught in the act of kidnapping as well as the grossly disparaging and unsupported assertion that his brother and former Deputy National Chairman of the Peoples Democratic Party, Chief Austin Umahi, a personification of integrity and sound morals, was recently arrested while attempting to cart away some millions of USA Dollars, Chief Eze said the People’s Democratic Party and its mercenaries may have been swayed into an impromptu and deliberate amnesia in their strenuous but fruitless hump to meet-up the herculean task of an opposition party in a state like the present Ebonyi, where government, through service delivery, enjoys the unalloyed loyalty and support of the people.

In a statement made available to media houses, the party Chief said it is widely obvious and obtrusively egregious that the opposition Peoples Democratic Party in Ebonyi State is still reeling from the pains inflicted on them by the well-informed and cogent exit of the State Governor from their fold when the badly perforated umbrella could no longer shield and protect the interests of people of goodwill like Umahi, and the general public from the hurtful claws and sharply-pointed fangs of over ambitious power monopolists who are fast spreading their tentacles to devour the poor from off the earth and the needy from among men in the pursuit and undue advancement of their political estate and merchandise at the detriment of the plebs.

Eze noted that in sponsoring ‘Gazette Publications’ to trumpet cocktail of lies against the Governor, the People’s Democratic Party forgot that as a Public Officer of his cadre, Governor Umahi is severed from the membership and management of Brass Group of Companies and as such, could not have been involved in any transaction in connection with the business of the company.

He however expressed delight that the Governor and Brass Group of Companies, a legal entity, have set the law in motion against the so called Gazette Publications so they could shade more light on their fictitious claims. It is indeed saddening that the media organisation could allow itself to be conscripted and remote-controlled in a manner grossly incompatible with the ethics and ethos of media practice and journalism.

On the allegation that the Governor’s brother in-law was caught in the act of kidnapping, Eze assured the public that the truth of the matter will soon be unearthed, stressing that it is not the first time such unfounded allegation is levelled against the Governors friends from his home town and on all occasions, they were found to be false and calculated attempts to smear the image of the Governor.

In the case of the press statement issued by one Silas Onu, a self-described Publicity Secretary of an illegal PDP faction in the state, where the hireling tried to lower the hard earned reputation of the former Deputy National Chairman of the Peoples Democratic Party (PDP), Deacon Austin Umahi, whom he alleged to have been arrested at the Abuja International Airport while attempting to cart away about $20 Million, Chief Eze said such incidence only took place in the figment of the imagination of the publisher, adding that available records reveal that Chief Austin Umahi has not left the State of Ebonyi since the outbreak of the second wave of COVID-19 in Nigeria, let alone making attempt to travel outside the country.

To further buttress the fact that the allegation was a mere work of fiction intended to malign, Chief Eze said after Austin Umahi publicly debunked the assertion while addressing the Press in his private House in Abakaliki, Mr. Silas Onu and the PDP, having been tipped of the weight of such allegation, quickly sent emissaries to apologize to Chief Austin Umahi.

Eze further highlighted that the only sin that Chief Austin Umahi committed is that he is related to Governor Umahi and has joined his brother to ditch the sinking PDP and joined the most Progressive Train in Africa, the All Progressives Congress.

The opposition PDP and allies, in their confused state did not just stop at their unholy acts of smearing the image of the Governor, they went a step further to recruit some uncouth ingrates whom the Governor appointed into his government, and commissioned them to sign a petition against the Governor and his government to the EFCC and by the time they were invited by the anti-graft agency to substantiate their bogus claims, they scampered for safety.

Admonishing the People’s Democratic Party to employ modesty and be a bit more constructive in their approach to issues by steadily conducting proper assessments ahead of any media engagement, Chief Eze tasked them
to shelf their self-serving and crafty scheme of misleading the reading public with malicious myths that only distort and misshape facts and history, stressing that the role of opposition requires an appreciable degree of tact, skill and sensitive mental and aesthetic perception and not a fit of bad temper and spiteful tantrums that contradict even the minutest locally recognized standard of civilized behavior, ethics and decorum.

See also  APC must prevail on Tinubu to step-down if the party hopes to win in 2023 - Hon. Rex David

Expressing confidence that the campaigns of calumny launched by the opposition and targeted at souring the healthy relationship between Gov. Umahi and the people of Ebonyi State will definitely come to naught, the party stalwart said the Peoples Democratic Party needs be reminded that the overwhelming endorsement and love showered on the Governor by the good people of Ebonyi State and which resulted to his electoral victory especially, in 2019, is as a result of the general assessment of the socio-economic drive, legendary achievements and sound policies of the the State Governor who doubles as Chairman, South/East Governors Forum and not on the footing of his membership of the umbrella party as is widely alleged.

The party chief warned detractors to ‘steer clear’ of the affairs of the Ebonyi State Governor and his administration, stressing that the people to whom sovereignty belongs, are very much satisfied and grateful to Umahi for rewriting the story of a once insignificant state to the fastest developing state, nay, an Eldorado.

Eze finally commended and congratulated His Excellency, Chief Martins Elechi, immediate past Governor of the State, 2019 APC Governorship candidate, Senator Sonny Ogbuoji, Senator Julius Ucha and other great leaders of the party for resolving to work with Governor Umahi in his drive to reposition the State as the number one State in Nigeria.

While appealing to Gov. Umahi never to give -in to the satanic antics of opposition elements and detractors who are poised to smirch his very good records with their potpourri of venomous and disparagingly hostile bushwhacks and sink public estimation of his person, Chief Eze called on Ebonyians to continue to show maximum support to the Governor in his desire to turn the once backward state(Ebonyi) into the development haven and investment hub of the African region.