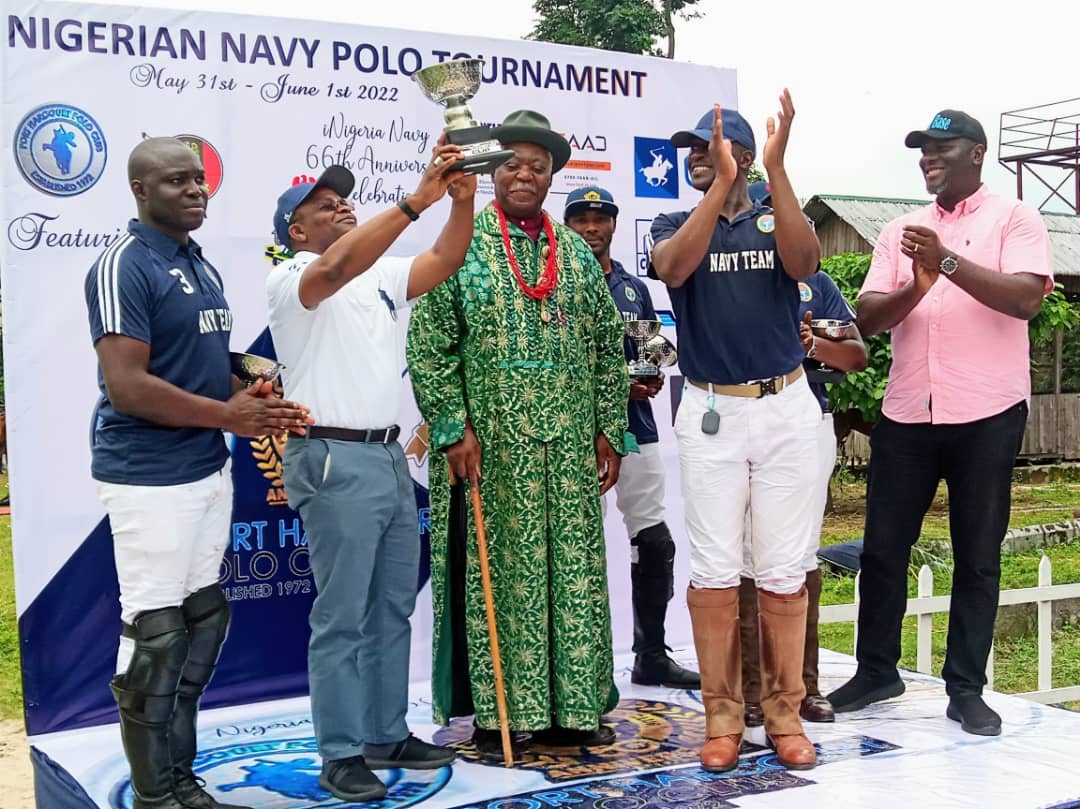 President of the Port Harcourt Polo Club, Engr. Chukwudi Dimkpa has urged the Chief of Naval Vice Admiral Awwal Zubero Gambo and the Nigerian Navy to domesticate the Polo tournament as major event in subsequent celebration of her annual anniversary itinerary.

Dr. Dimkpa made the appeal in his address of welcome, as the Port Harcourt Polo Club played host to the Nigerian Navy Polo tournament organized to mark the celebration of the 66th anniversary of the Nigerian Navy.

He assured that the Port Harcourt Polo Club is ready, and will begin robust planning to host a bigger and better 67th anniversary tournament.

Chief Dimkpa who is also Chairman South South zone of the Karate Federation of Nigeria, expressed happiness on behalf of the Port Harcourt Polo Club for the opportunity to host the 66th Naval anniversary tournament.

He thanked the Nigerian Navy for a successful anniversary, also commended the Chief of Naval staff for rejigging the game of Polo in the Nigerian Navy, making the force come tops in recent Polo games, thereby justifying the force’s position as an organization that brought Polo into Nigeria.

See also  Not Salah, Not KDB, Not Pogba, See The Highest Paid Player In The Premier League.

“We want to say congratulations to the Nigerian Navy on their 66th anniversary and express our gratitude for being able to be your host for this event which is the first of it’s kind”.

“I want to state that since the present Chief of Naval staff came in, he has rejigged Polo in the Navy and all of a sudden, the Nigerian Navy is really taking over Polo and they have been supporting port Harcourt polo club. They are the current holders of the T.Y Danjuma cup and today they’ve come and won again”.

“But we sincerely want to thank the chief of Naval staff because it was the Nigerian Navy that brought polo into Nigeria and it was rejigged by them, we say thank you”.

Chief Dimkpa who is Mene Yereba 1 of Gwara Community, khana Local Government area, used the occasion to send his heartfelt condolence to families of those who lost love once in an unfortunate incidence that occurred recently in the Polo Club premises.

He said the Port Harcourt Polo Club, as a mark of respect for the dead, did tailored down her activities. He requested a minute of silence and prayers in honor and for the repose of the souls of the dead.

“Let me use this opportunity and say something which is very dear to everyone seated here and Rivers state at large. Over the weekend a church had an event on our practice field and there was a stampede and quite a number of people died within that period, and so when we started we actually took out a minute of silence to pray for the repose of those who lost their lives and based on that, we also tailored down this tournament to make it a low key one and cancelled all the after entertainment as a mark of respect”.