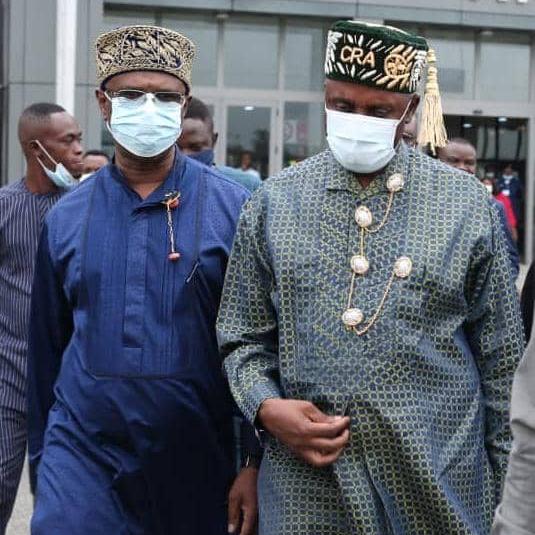 Frontline governorship hopeful in Rivers State under the All Progressives Congress, APC, Dr. Dakuku Adol Peterside, has urged the Minister of Transportation, Chibuike Rotimi Amaechi, to declare for the Nigerian Presidency without “further hesitation.”

Peterside, who made the call last Tuesday during his visit to the Adokiye Amiesimaka Stadium, Igwuruta, Port Harcourt, Rivers State capital, venue for the All Progressives Congress, APC, Thanksgiving Service in honour of the Honourable Minister, scheduled for Saturday, April 7, 2022, said Amaechi was “eminently qualified” to preside over the affairs of Nigeria.

Giving reasons for his call on Amaechi, Peterside said that Amaechi had shown sufficient capacity and will to take the best decisions for the overall interest of Nigeria as far as this Federal Government was concerned. He declared that Amaechi had performed excellently as a Minister and passed every credible test to prove his love, loyalty and dedication to Nigeria and the Administration of President Muhammadu Buhari.

“Amaechi has left no one in doubt as to his fabulous large heart to score infrastructure goals for the country. Not even his dyed-in-the-wool enemies would deny that Amaechi has performed excellently as Minister of Transportation. Today, Nigerians call him “Mr. Connect-Nigeria” due to his drive to re-build, re-brand, re-position and revive the nation’s railway infrastructure, connecting the East to the West, North to the South through modern rail lines and subways. He has connected seaports to railway stations for the smooth freighting of goods to the necessary markets. Amaechi has also worked to secure Nigeria’s waterways, protect Nigeria’s critical maritime infrastructure for the growth of the economy and wellbeing of our citizens.”

Peterside, a former Director General, Nigerian Maritime Administration and Safety Agency, NIMASA, said as Minister in the Administration of President Buhari, Rotimi Amaechi had pursued and delivered on the President’s Railway Development Plans which fulcrum has been to connect every part of the country.

The APC chieftain said it was clear to every Nigerian that the Honourable Minister possessed the mental strength to hold together the various diverse nationalities in the country.

“Amaechi has shown sufficient mental strength to manage a country as diverse as Nigeria as well as her nationalities. De-tribalised to a fault, Amaechi sees the East, West, North and South as Nigeria and not regions or states, and treats Nigerians first and last as Nigerians. He showed that much off as governor of Rivers State when he appointed Nigerians of other states of origin as Commissioners in his cabinet.”

Peterside added that since Nigeria returned to democratic rule in 1999, Amaechi had been schooled in governance and political diplomacy, describing him as the man diivinely prepared for the job. “In Amaechi’s case, as a humble student in Nigeria’s politics and governance, he has intimidating credentials. As Speaker, Rivers State House of Assembly, his colleagues-speakers elected him Chairman, Conference of Speakers. His leadership qualities endeared him to them and when it was time for his re-election, in the face of external interference, they resisted dictatorship to re-elect him.”

Peterside commended APC in Rivers State for the planned Thanksgiving Service even as he noted that it would offer the party an opportunity to “thank God for the journey so far.”

See also  Eze Celebrates Amaechi At 56: Describes Him As An Enigmatic Architect Of A New & Secured Rivers State!

He commended Rivers’ APC faithful for their resilience which he said had produced elected leadership across board. “We have successfully held our ward, local government, state and national congresses and convention, respectively, in a most dignified and fulfilling manner.

He continued: “Your prayers and fervent believe in the ability of the APC to turn around the fortunes of Rivers state and Nigeria have continued to be our source of strength and pride” even as he urged them to come out enmasse on Saturday to thank God for His faithfulness and guidance.

Known as the “turnaround expert”, Peterside, a development coach and Lagos Business School lecturer, expressed happiness that the Thanksgiving Service would hold at the Adokiye Amiesimaka Stadium, which he noted was one of the landmark projects Amaechi executed in the state as governor. “It is befitting that the upcoming Thanksgiving Service to God in honour of our leader, shall be holding in this magnificent Adokiye Amiesimaka Stadium, one of the landmark projects he executed for Rivers State as governor.”