Language In Ubang Is A Sign Of Maturity In Boys. Boys And Girls Grow Up Speaking The Female Language,But At The Age Of Ten(10) Boys Are Expected To Use The Male Language.

According To The Community’s Chief, If A Child Does Not Switch To The Correct language by a certain age, they are considered “ABNORMAL” 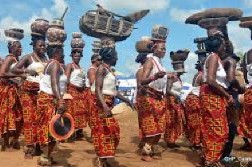 The Ubang People Are Concerned About The Future Of The Languages,Because Neither Of Them Are Written Down,So Younger Generations Have The Mission If Perpetuating Them. 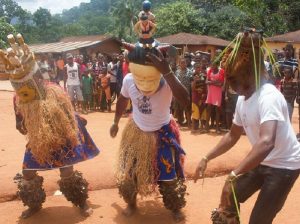 Neighbouring Villagers, Who Know About The Extraordinary Development Look At The People With A Feeling Of Awe.

Ubang People Know How People feel about their wonderful talent and now and again, they tell their story in a way that makes others green with envy.

For instance, when Niger Delta Voice
visited the community, the elders led by Ogbe Sylvanus Odobi, said God descended on one of the mountains in the villages of OKIRO,Stood on the rock at the peak of the mountain and distributed languages.
“He started with us (Ubang) since it is our mountain that He stood to distribute the languages and His footprint is still etched on that rock till today,” Odobi flanked by two others, Ochui David and Clement Obi said.
His words: “It was after God had distributed the languages to the men and women of Ubang that He discovered that the languages would not go round the communities if He continued to give each for both sexes and so He decided to give the other communities one language for both sexes.”
The clan head, Chief Moses Ade, corroborated their story.
No plan to merge languages
Populated by energetic young men and stunning girls, Ubang comprises of three villages, Okwersing, Ofambe and Okiro, the variances in language between the male and female folks is what stands the community out they most and they are quite proud of it.
They boast that God so loved them and except He comes down again to the spot in the community where He handed them the languages and directs otherwise, they had no plan to fuse the two languages.
Odobi asserted that right from birth, each child born in the community knows he or she has to speak the language of his or her sex because any attempt to learn the language of the other will end in FUTILITY!!!
“If a female tries to speak the language of the male or vice versa, she/He will not be able because she will be CONFUSED And Will Be making MISTAKES
An elderly woman in the village, Mary Orim, said the words that form the two languages were given by God, so no one language is superior to the other and each sex speaks the words allotted to their language with pride and confidence. 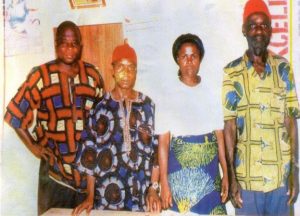 “Why should I speak the men’s language after God has considered it fit to give me my own language? She queried when asked why the women did not revolt and speak the same language with male counterpart as it is done in other places.
She told Niger Delta Voice , “you (reporter) will spend the entire week here if you decide to write all the words down because nearly All the words we speak are separate.”
Stuffing her nose with snuff from Her Carefully-Held Snuff Box,Giving Few Examples As Thus ;

She added: “If a woman, no matter how old, begins to speak like a man, the women will laugh at her. Same To When A man Speaks That Of Women