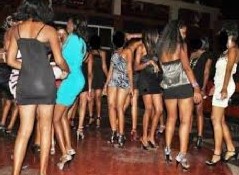 I entered a bus, A woman and her 7 years old son were sitting beside me in the bus. It was raining and all the twilight girls (Prostitutes) were standing by the roadside.

The boy asked; “Mummy, what are all those women doing?.”

His Mother replied; “They are waiting
for their husbands to come back from work.”👯🏾‍♀

The bus driver 🚌turned around and said;
“Why don’t you tell him the truth?.
Little boy, they are prostitutes, they sleep with men for money. Said the Driver”😎😎

The boy’s eyes got wide and asked; “Mummy
is that true?” 😨😨
His mother, glaring hard at the driver replied; “Yes.!!”
After a few minutes, the boy asked; “Mummy, what happens to the babies those women have?.”

Up till now, combined road safety and passengers are still trying hard to see if they can separate the fight between the woman and the driver.

Me I kukuma come down and go without paying 🚶 🚍.