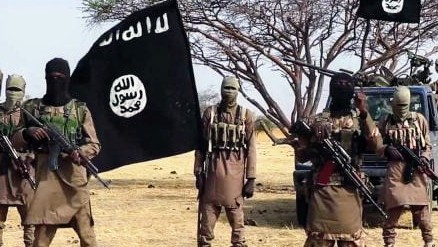 Dreaded Boko Haram terrorist group has left residents of Garkida, a community of Gombi Local Government Area of Adamawa State in tears in a fresh attack.

Six people including a police officer were reportedly killed in the aftermath which happened in the Northeast part of the country.
Naija News had reported earlier that members of the Boko Haram group on Thursday night attacked Garkida through the main road, causing many residents to flee to the surrounding mountains.
One of the fleeing residents had told reporters that he ”saw them moving into the town in five trucks and then heard sounds of gunshots and people running to the mountains”.
Subsequent reports revealed that eleven youths were abducted while food and medicine stores in the town were also looted by the dreaded group. Residents confirmed to newsmen that construction vehicles and houses were razed with fire during the onslaught.
Sharing her experience with the deadly attack, a resident who identified herself as Rebecca told newsmen that the attackers invaded the town at the hours when residents were preparing to celebrate Christmas with loved ones.

“They came into the town with about five vehicles and started sporadic shootings, forcing the villagers to flee in the ensuing confusion,” she said.

“We could see them from afar in our hideouts as they continued to loot, ravage houses, pharmaceutical stores even as domestic animals were not left out,” she added in her phone conversation with reporters.

“I had a safe drive to Garkida, but  entering the town, I was welcomed by an Army truck filled with armed personnel speeding towards the entrance of the town. stopped by the market, trying to enquire what was happening, to my dismay, everyone was running for his dear life,” he noted.
“I managed to stop someone and asked, his answer sent a paralysed feelings down my spine, “they are coming again”. Without much ado, I knew it was Boko Haram,” he added.

According to Garkida residents, they watch from the hidden how the terrorists engage in a fierce battle with the Army and the vigilantes. “We could see them also packing cartons of drugs from the hospital store. Moments later, we saw fighter jets dropping bombs and neutralising them,” they shared.

Their submission reads: “The following morning, 25th, we began counting our losses. A police officer was shot dead. 5 other corpses were later found, two of which are believed to be workers of the ongoing water project, and the others, youths.”
“Trucks belonging to road project contractor were all raised down, hospital pharmacy was broken and all medications looted, hospital ambulance was vandalised, cars belonging people were burnt, 11 of our youths were taken into captivity. ”

However, no security agency at the moment has confirmed the casualties, but sources told reporters that three air force fighter jets have been on the routine bombardment of the areas as they continue to attack the insurgents.