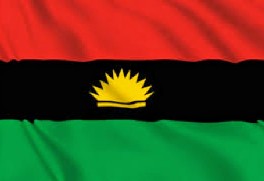 You will get terrible signal from us soon – Biafra group tells Buhari govt.

The Biafra Nations League, BNL, has warned that the continued militarization of Orlu, Imo State and other parts of the South East by the Federal Government will likely result in uprising in other areas of Biafra.

The group warned that the President Muhammadu Buhari government will be getting a “terrible signal” from it in a matter of time.

The BNL stated this in a brief statement to DAILY POST on Tuesday signed by its National Leader, Princewill Chimezie Richard where it also disclosed its decision to move their operational base to Bakassi Peninsula.

Richard said that the group is prepared to face any trouble that may arise from it’s activities, adding that the government has been taking them for granted because it(FG) is yet to receive a signal from them.

“Our operational base is and remains Bakassi Peninsula, although we have been peaceful and watching the way our supporters are being killed,” he added.

“This government does not understand the word peace, I think because they are looking down on us

“They will get a terrible signal from BNL soon”.

The Nigerian government says granting amnesty to Boko Haram members, bandits, drug barons and militants is not a new thing and not unique to the country alone.

Minister of Information and Culture, Lai Mohammed, disclosed this on Wednesday while speaking on AIT’s ‘Kakaaki’.

According to the minister, there is nothing wrong with granting amnesty to criminals if the purpose is to restore desired peace in affected areas.

Mohammed said it is unfair to criticise the Zamfara State Governor, Bello Matawalle, for granting amnesty to bandits who once terrorised the North-West state.

He said, “When you are fighting insurgency, you use both kinetic and non-kinetic (means). Granting amnesty to notorious drug barons, notorious militants is not a new thing, it is not unique to Nigeria.

“You need to be in the shoes of the Zamfara State government or governor to appreciate the issues at stake (and) why he has done that. Don’t also forget that the state governors are their own chief security officers.

“When you are dealing with insurgency, kidnapping, banditry, you are interested in the bigger picture; how do we restore peace? If granting amnesty to one notorious kidnapper is going to give me peace in my state, I might take that decision. If granting amnesty to one repentant warlord would help me capture a thousand bandits, I might take that decision. Don’t just look at what is in the public place, understand the very high complexity of managing insurgency and banditry.

“The governor of a state understands the dynamics of the state and takes decisions but it will be unfair of us to criticise him (Matawalle) without knowing what he did and I want to believe the governors work together with the security forces in their own state, so, it is not as we think.”

Zamfara state government recently granted amnesty to Auwalun Daudawa, the leader of the gang of bandits that abducted over 300 schoolboys in the Kankara Local Government Area of Katsina State late last year.

Daudawa and his gang on December 11, 2020 invaded the school, shooting indiscriminately to scare residents. The operation led to the disappearance of over 300 students.

The abduction happened when President Muhammadu Buhari was visiting his home state of Katsina.

After their release on December 17, 2020, Matawalle, said the boys were rescued through the help of Miyetti Allah Cattle Breeders Association of Nigeria (MACBAN) and that no ransom was paid.