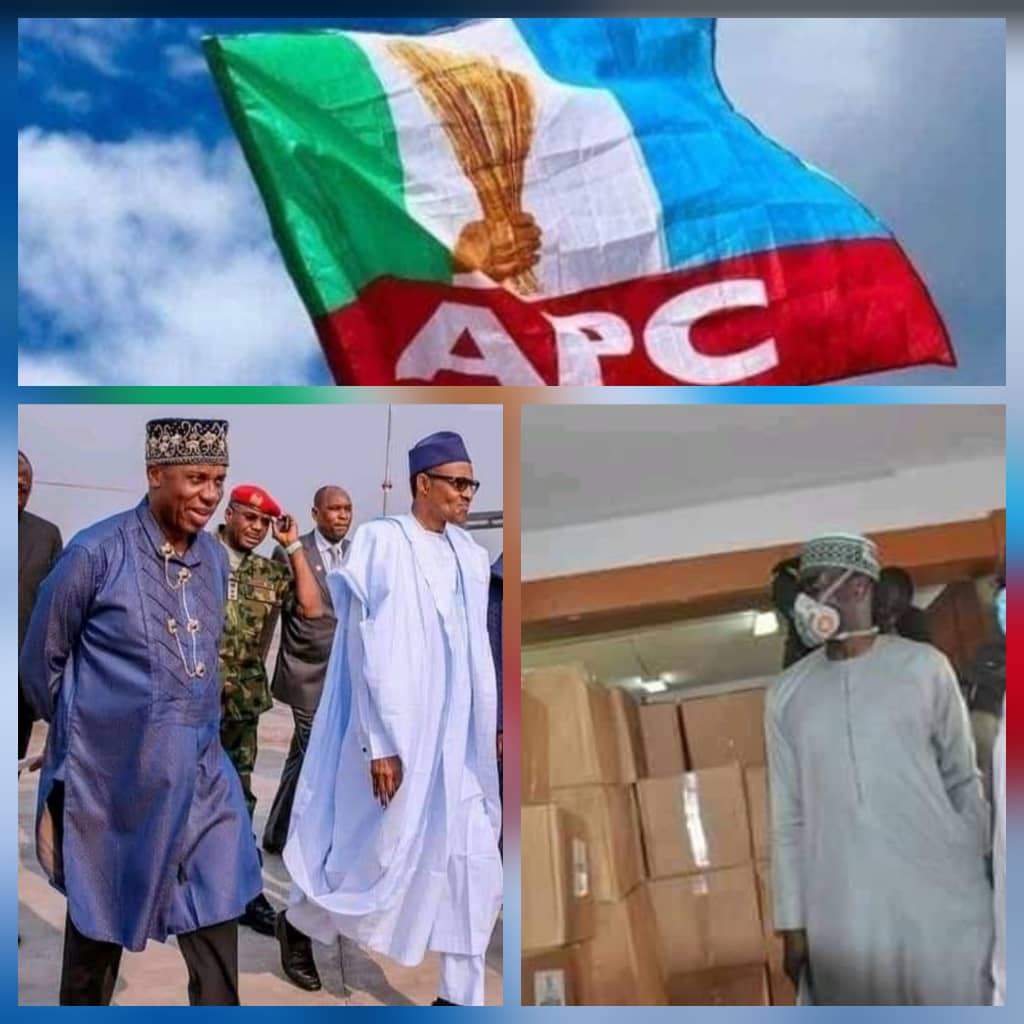 APC Membership Recruitment Drive: Eze mocks Abe, Aguma, as exercise is set to record success in Rivers… Urges true progressives to support rebuilding plan for the state …Congratulates and Urges Barr. Kolawole Omotinugbon Led Registration Committee to do a great task to the rebuilding of APC in Rivers State.. Hails Judiciary for redeeming itself, breaking free from the hold of those muzzling it against all known tenets of Justice..

The membership revalidation and registration drive of the All Progressives Congress (APC), in Rivers, which seemed somewhat obscured by haze of the litany of lawsuits and varying interpretation of verdicts which clearly places very purposeful ambiguity on judgements of Courts and suggest a clear conflict of interests, seems to have been purged of all incertitude following the declaration from a Federal High Court sitting in Abuja, which clothed the Rivers APC with the mandate to proceed with the exercise to the exclusion of all snooping meddlers, nosy intruders and uninvited interlopers poking into the affairs of the party.

Recall that a Federal High Court in the FCT had in a recent judgement delivered last week, ordered the Rivers APC to go ahead with the membership registration and revalidation drive as planned and also barred anyone from inhibiting the exercise and in compliance with the verdict, the party will deploy all necessary resources – human and material, to proceed with, and ensure the smooth sail and success of the exercise.

Reacting to the development, chieftain of the All Progressives Congress and erstwhile National Publicity Secretary of the defunct New Peoples Democratic Party (nPDP) Chief Eze Chukwuemeka Eze, said the verdict has summarily laid to rest all speculations, skepticism and uncertainties surrounding the planned membership drive in Rivers State.

Eze therefore encourages those interested to join the party to storm various Ward Centres and revalidate their membership of the party starting from 2nd February as Barr.Isaac Abbot Ogbobula the legally accepted Rivers State Chairman Caretaker Committee APC have asserted that, “There is no court order stopping the All Progressives Congress APC Rivers State Chapter from participating in the party’s Membership Registration and Revalidation Exercise,what we have is a court judgement backing us for the exercise”

In a statement made available to media houses, the party Chief said Senator Magnus Abe, Igo Aguma and others have deliberately continued to keep a distance from reality in their flagrant wickedness and sworn impious engagements against Rivers people, contrary to all modesty and every sense of human sanity, describing the duo as an unsavory blend of characters capable of overwhelming the very delicate flavor of every meaningful human alliance.

He said the intermingling of different
varieties of people of schlock pedigree like Abe and Aguma against a progressive group like the APC, is suicidal to every set objective and a conspicuous antithesis of progress, creativity and wholeness; defying every effort at peace-building and making brotherhood even impossible.

Dismissing the rumoured fresh crisis and existence of another faction in the party as untrue, Chief Eze said the strategic dissolution of all party structures and the subsequent constitution of interim leadership, to wit, Caretaker Committees at all levels, has calmed frayed nerves, resolved all crisis and destroyed every satanic devices usually relied upon by the enemies to execute their nefarious machinations in furtherance of their selfish private vendetta and in pursuit of their political merchandise.

The APC chief said their exists no basis including in law, on which any third party can cleave to any position in the party, stressing that the Isaac Abott Ogbobula led Caretaker Committee of the Rivers APC has the vertex of legal, hierarchial and popular recognition and backing to steer the affairs of the party, noting that anyone purporting to lay claim to any office at the ward, local government or state level is merely on the frolic of his own, as the party leadership is not a subject of contention.

He said by their practices of sabotage and given their serial disobedience to Court judgements and the directives of President Buhari and the National Leadership of the APC for all pending litigation against the party to be withdrawn, Abe and Aguma have been certified as lawless, having continued to constitute nuisance; no wonder Gov. Wike, Willy-nilly, secretly warned against allowing them into the umbrella party notwithstanding the roles they played against the APC for his emergence in 2019.

Chief Eze described the interim order procured by some mercenaries working in consonance with some ‘foreign bodies’ to scuttle the planned membership drive as inconsequential owing to the fact that the Judgement of the Federal High Court came earlier. This follows the principle of law which declares that ‘where there are two equal equities, the first in hand prevails’. It therefore follows that the FCT High Court Judgement is still subsisting and can only be vacated by a higher Court, in this instance, Appeal Court, and not a Court of coordinate jurisdiction.

He called for the sensitization of party faithful and intending members on the importance of the exercise, as it remains the only determining factor for one’s membership, stressing that those at the grassroots must be adequately mobilized for mass registration to end the grossly defective administration of Gov. Wike and the People’s Democratic Party.

The party Chief called on leaders of the Rivers APC to take the exercise seriously.

He commended Judges for beginning to restore public confidence in the judiciary notwithstanding the huge conspiracy to sweep the Court from its hitherto impartial Judicial moorings into the dangerous waters of politics in furtherance of sharp practices of oligopolistic mediocre occupying public offices in Rivers State.

Eze expressed satisfaction
over the calibre of carefully selected seasoned and impartial political leaders and seasoned progressives appointed to oversee the membership drive in Rivers State, stressing that the team represents a blend of valiant thoroughbreds and composite patriots impressively stocked with remarkable skill and tact to execute the given task and achieve timely results with harmonious effects.

With the successful arrival of the Seven-man team headed by Barr. Kolawole Omotinugbon and arrival of materials for the excetise, Eze expressed optimism that the crafty device of Gov. Nyesom Wike, in Collaboration with Senator Magnus Abe and his co-conspirators targeted at decimating the All Progressives Congress in Rivers State has been defeated.

The party Chief highlighted that all what Gov. Wike and his collobarators did to decimate the APC in Rivers State clearly indicates that the PDP-led administration is very much afraid of a strong opposition party like the APC with the wherewithal to send them packing and put things right in the State.

Eze described the plots by Wike, Abe and others not to have APC in Rivers State as a sign of cowardice on their side as they are fully aware that their days at the helm of affairs in Rivers State are numbered no matter their devious and devilish plots.

Nevertheless, Eze expressed confidence that given the poor performance of Gov. Wike and the umbrella party, the APC, God willing, will sweep the satanic government down into the gapping abyss come 2023.

The party stalwart also admonished Sen. Magnus Abe, Igo Aguma and others to shelf their planned scheme of hijacking the membership registration and revalidation drive in their various units in a bid to justify their non-participation and continue to wreck havoc in the party.

Warning of the consequences of such unceremonious indulgence, the APC chief called on Abe and his circle of saboteurs to desist from nosing around the affairs of the party, describing them as snooping rabbits who have no business in a family of progressives.

Eze commended President Buhari and the Mai Buni led Caretaker/Extraordinary Convention Planning Committee for its proactive leadership, stressing that it has continued to discharge its responsibilities with due diligence and visible results, especially in restoring harmony and instilling discipline which seemed to have taken flight from the party prior to now.”

Eze admonished party chieftains and members to adhere to the Leader’s position which he echoed recently, “Go and Mobilize your supporters to register and revalidate their APC membership and prepare for Elective Congress. No more Selection.”

He hailed the Transportation Minister and South/South Leader of the party, Rt. Hon. Chinuike Amaechi, for continuing to provide quality leadership even in the midst of sponsored campaigns of calumny targeted at robbing him in the mud and smearing his towering political profile.i