The headquarters of the Independent National Electoral Commission (INEC) in Anambra State, has been set on fire. 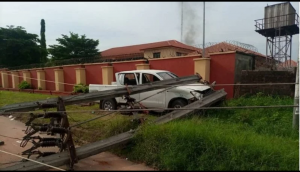 Word has it that gunmen also attempted to attack the Police ‘B’ Divisional Headquarters close that is in proximity to the INEC office.

Our source to Anambra State Police, who confirmed the incident to latestnaija said the attack happened on Sunday night.

The Videos circulating on social media, captured how part of the INEC building has been set on fire and rapid gunshots between people who we can’t independently confirm.

The Police assured Anambra residents of safety after gunmen attacked the INEC office in the state on Sunday.

In the press conference held, the state police spokesperson Ikenga Tochukwu said they are working with the Military, and other para military agencies and the DSS of one joint operation to keep the state safe.

He debunked the news going round in local news saying ‘Black Sunday in Awka’, Tochukwu said there is no black Sunday in Awka, he said nothing happened to all the police officers who were on patrol during the attack.

He also said they don’t have any casualty in the attack that happened on Sunday night.

“We recorded 95 percent success in that attack. We just lost some parts of our buildings and the  hoodlums burnt four vehicles in INEC office.” 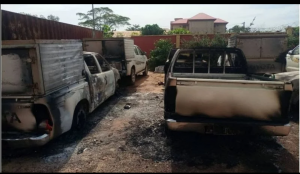 He said they are working with the Military, the Navy, Army, Civil Defence, Immigration and even the DSS of a joint operation to keep the city safe.

“Joint patrols are all over our city, and we are back on the streets to maintain law and order.”

He also said they seized three vehicles and some guns from the hoodlums as investigation is still going on to know the people who are behind the attack.