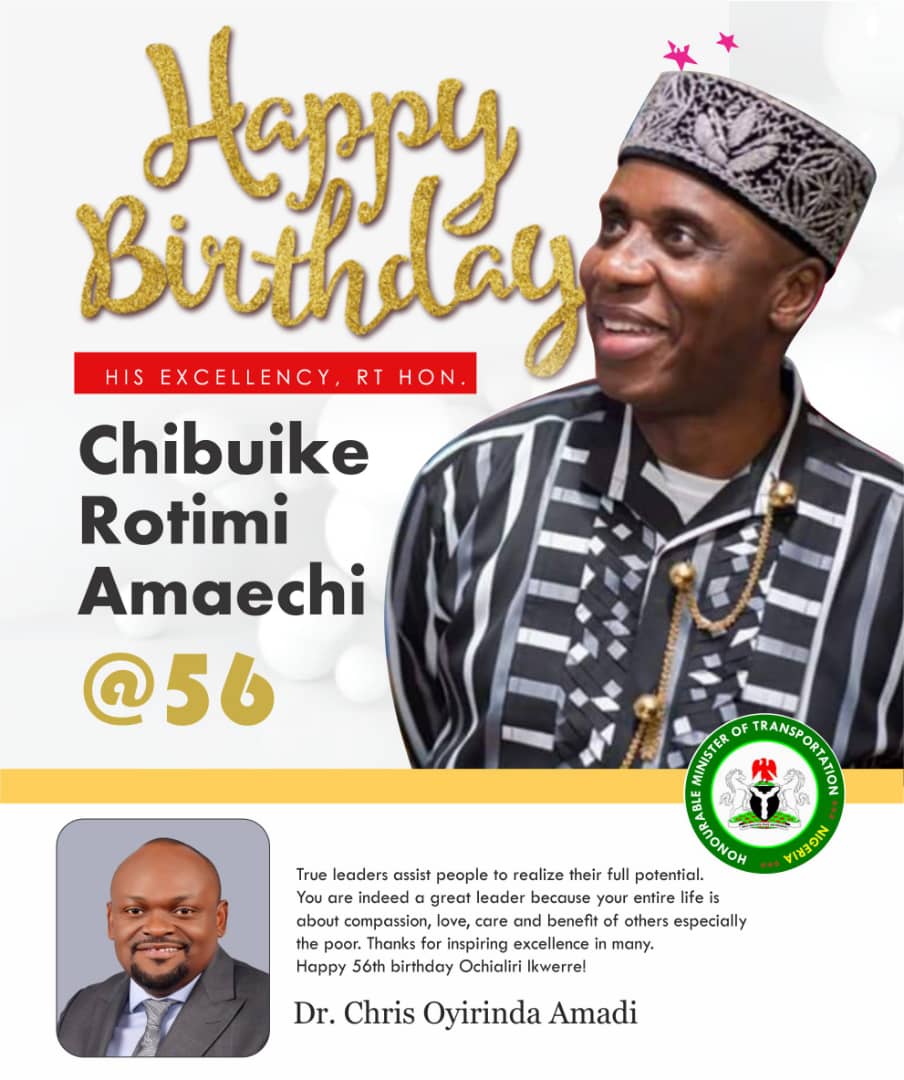 Celebrating a Dynamic leader and Pacesetter @56

My family and I, joyfully felicitate with an exceptional achiever and phenomenal performer with compelling leadership credentials and penchant for excellence: Rt. Hon. Chibuike Rotimi Amaechi, CON, Honourable Minister of Transportation, as he clocks 56.

Your Excellency, your birthday reminds us and all well-meaning Nigerians of your laudable achievements and
outstanding performances, both as a Minister and former Governor. Your sense of patriotism and passion for service to our fatherland never wanes, but continues to spur you to greater accomplishments towards the betterment of our dear nation. 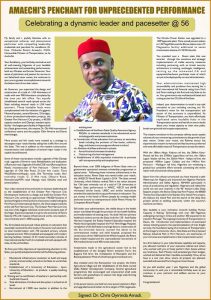 As Governor, you supervised the design and construction of a total of 1,424 kilometers of roads with over 900 kilometers completed by the time you left office. You equally rehabilitated several roads spread across the State including internal roads in LGA head quarters. These laudable feats were complemented with the initiation of a gigantic Monorail project, several flyovers, 25 bridges, 6 shore protection/reclamation projects, the Greater Port Harcourt City project, a 40,000 capacity stadium and Olympic standard sport facility – the largest sport facility in Nigeria built by a State government, the massive Dr. Obi Wali international conference centre and the popular Obiri Ikwerre and Eleme interchanges.

More access and link roads were created as a strategy to decongest major roads thereby aiding free traffic flow around the State. This was in addition to the massive construction, reconstruction and dualization of several major roads in the capital city and beyond.

You formulated and pursued robust policies on education that essentially resolved the dire straits in the sector and ushered in its total transformation with 750 standard primary schools proposed and over 450 completed and equipped with modern learning facilities; initiation of 24 model secondary schools of  International standard with 6 completed and well-equiped with state-of-the-art facilities.

To drive your lofty objectives of repositioning education in the State, you quickly adopted and enforced the following policies:

i. Educational infrastructure revolution to build and equip primary and secondary schools in the State to world class standards.

iii. Training and re-certification of teachers in partnership with the British Council

iv. Total elimination of strikes and disruption in schools at all levels

v. Recruitment of 13200 new teacher in addition to the existing ones

vi. Establishment of the Rivers State Quality Assurance Agency, RSQAA, to maintain standards in the educational sector including public and private institutions.

vii. Introduction of free education from primary to secondary levels including the provision of free books, uniforms, bags, and shoes to encourage enrollment in school.

viii. Abolition of all fees and levies in schools.

xi. Establishment of skills acquisition institutions to promote self- entrepreneurship and employment.

Beyond these, over 2000 indigenes of Rivers State were on government sponsored overseas scholarship programmes in special areas.  Following these immense achievements in the education sector, Rivers State was named under your watch, the UNESCO World Book Capital in 2014. The State owned University, which hitherto ranked 76th in the nation became the 12th best university out of a total of 124 universities in Nigeria. State performance in WAEC, NECO and JAMB witnessed similar boost. UBEC and similar institutions awarded the state laurels in top performance in education. You put money in the hands of Rivers people by creating wealth anchored around an entrepreneural cliché ‘Rivers Money for Competent Rivers People’

See also  "Wo, your eyes will see shege" – Reactions as lady gives reasons her man won't cheat on her (VIDEO)

Still under your administration, the visible decay in the health sector was halted through the provision of new health facilities and modernisation of existing ones. You built 160 new primary healthcare centres across the State; built the 120 – bed Kesley Harrison hospital; the Kesley Hayford Specialist hospital; the Maxilo-facial specialist hospital; the Prof. Nimi Briggs Hospital; completion of the Self-destruct syringe factory; construction of the bio-larvicidal factory; started the about to be commissioned mother and child hospital; proposed the construction of the 1000-bed Karibi Whyte hospital; the Rivers State mobile hospital and the unprecedented recruitment of 436 medical doctors and 400 nurses statewide.

Investments made in the agricultural sector led to the establishment of the Songhai Rivers Initiative Farm; the Buguma Fish farm; the revitalisation of Risonpalm and the Banana plantation ‘Most of which have gone moribund now’.

Also initiated were the Rumuewhor rice project, the Etche Agricultural village and the rehabilitation of the State owned Delta Rubber Development Company. Several agricultural programmes that encouraged and empowered small scale farmers with grants/loans to venture into large scale farming were also instituted.

In the power sector, you built two new power stations in Afam and upgraded several others to hit a target of 750 megawatts. The Omoku Power Station was upgraded to a 150Megawatts plant, Trans-amadi powers station to 130 MegaWatts and the Eleme station into a 75 Megawatts facility additional to seven transmission stations of 132/33 kilovolts.

You presided over a  Rivers state that was secured  through the conscious and strategic implementation of viable security measures including partnering with an Isreali security architecture in training, exchanges, intelligence, setting up the renowned C4i and equipment/hardware purchases most of which are yet to be deployed by current administration.

Your administration maintained high accountability and prudence thus earning her a dual international AA financial rating from Fitch and Poors making it the first and only State to do so. Your governance was multisectoral based and  cutting across the 23 LGAs of the State.

Indeed, your determination to excel in any task entrusted to you including carrying out Mr. President’s vision for the transportation sub sector of the economy is unparalleled. As Minister of Transportation, you have effortlessly replicated same laudable feats in the Transportation sector and has left no one in doubt about your innate capacity to chart new paths, break new grounds and surpass expectations.

The massive revolution in the comatose railway sector speaks volumes of your unwavering commitment to the growth of our dear nation. Under your watch, the Railway sector has experienced a massive turnaround and has become a preferred and most affordable means of Transportation across the nation.

Apart from the railway turnaround you have ensured a safer Waterways for Nigeria and improved the Nigerian Maritime Administration and Safety Agency, NIMASA particularly in areas of productivity and regulation. Nigerians and indeed the world can see your imprints in the 90- hectare Lekki Deep Seaport project; the Bonny Deep Sea Port Project; the 80000 Twenty-foot Equivalent Unit Ibandan Dry Inland Port project, the Kaduna dry inland Port and the launch of the deep blue project aimed at tackling insecurity within the country’s maritime corridors;

Also laudable is your inclination towards building Human Capacity in Railway Technology with over 300 Nigerians undergoing training in China and another 300 expected to be trained in Portugal. The ongoing University of Transportation in Daura, the  Introduction and implementation of automated railway ticketing system; the operationalization of train freight services; the foundation laying of an Institute of Transportation at the Gregory University, Uturu, Abia State and the proposed Railway Industrial Park in Port Harcourt, are testimonies of your immense accomplishments in the transportation sector.

As you add another year, I join Nigerians and the global community to wish you a remarkable birthday even as you continue in your patriotic and selfless service to your fatherland.