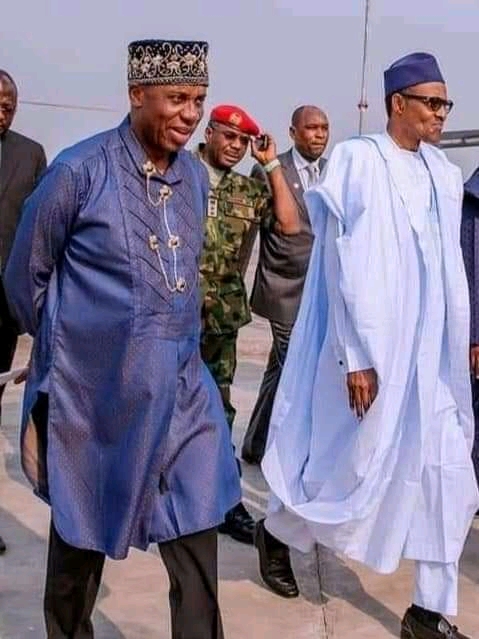 I don’t know what Ships and Ports online publication wants to achieve by its misleading caption of the statement of the Honourable Minister Of Transportation, Rt Hon. Chibuike Amaechi on Baro Port. The caption reads: “Amaechi Tags Baro, Other River Ports Waste Of Public Funds”. Even the opening paragraph of their reportage was a misrepresentation of the Honourable Minister’s statement. Ships and Ports Online publication not quoting him stated in their opening paragraph that “The Minister of Transportation, Rotimi Amaechi, has said that the construction of river ports across the country is a waste of public funds as they are not viable projects”

But in the interview we all saw, what Amaechi said is that “if the lower River Niger is not dredged, no vessel would be able to sail to Baro port”. He went further to say “I had this conversation with my friend, Senator Goje about the viability of the river ports that we have including Onitsha, Baro, Lokoja and Oguta river ports and I felt that it was a waste of funds”

To help his audience understand what he was saying, he further stated that “The reason is that for you to have those river ports functional, you must have to dredge River Niger. For now, even if you dredge, it is still 2.5 to 3 metre draft, which determines the vessel that can go there and the minimum you can have is a 6 metre vessel. There is absolutely no vessel that will come in there at 2.5 to 3 metres draft”

He again stated that “The idea when the Baro port was concessioned is that you pick up a cargo maybe in Warri or Port Harcourt because Lagos is too far, and put it on a barge and move it to Baro. But how many times will the barge be able to move those cargoes to Baro?”

I don’t understand this idea of using a misleading headline and malicious introductory paragraph to discredit what he said when we all know Amaechi is stating the obvious. The focal point of his statement is the need for additional dredging to 6 meters to make the ports more attractive for use.

It is important that Nigerians understand Chibuike Amaechi’s statement for what it is. The feasibility report emphasis that 6 metres dredging ought to have been complied with and should be the way forward.

First, we must appreciate him for being truthful because a lot of times people in government tends to cover things up in order to remain popular and make people happy. But in the end issues remain unattended to and over time snowball into a major problem that will have to be solved at a higher cost due to inflation.

To start with, Baro Port and others mentioned were conceived by previous administrations and the benefiting communities were not told the truth. Many of them were done on populist ground without in-depth analysis. The projects were started and there were no end to end plan. I want to believe that President Buhari’s administration and the ministry of transportation under Chibuike Amaechi saw to the completion of the contract already awarded because they don’t want to waste the money already invested and they didn’t want to disappoint the people.

Now the contracts as awarded have been completed but these ports are not functional due to error in planing. But it is important that the truth is told, our people should know why they are not in use and that is what Chibuike Amaechi has done. There is no sense in misrepresenting him except his political opponents are using this medium to want to discredit him.

And truth be told, Nigerian Government does not have money now to meet many of its obligations, especially for the dredging of our water ways. In this era of pandemic, there are many competing needs, ranging from how to solve the health challenge to meeting the needs of ASUU to ensure that our children gets back to school, to paying pensions and salaries, funding basic infrastructural development amongst others.

This is why we need to appreciate Chibuike Amaechi for telling Nigerians the truth. At least now we know what the challenge is and those concerned can understand why after commissioning the port, it is yet to become functional. I guess many of them are knowing for the first time that building a harbour and administrative building at river side is not all there is to having a port. The critical part is having a navigable water channel.

In fact we must appreciate Chibuike Amaechi for making this public because it provides all of us the opportunity to contribute ideas on how we can solve the problem. From those in Aba who will like to see Azuinmiri Port become a reality to those in Onitsha, Uguta, Ondo, Lokoja, Gelegele and other parts of Nigeria where there are potentials for normal seaports and inland ports, the information emanating from the Minister of Transportation is a guide on how we can go about it.

The Honourable Minister did not say what he said because he doesn’t want Baro Port and other potential ports around Nigeria to work, he is only saying things as they are. In fact he will be the happiest person if all the ports in Nigeria are developed and are functional. Because he is aware of how positively they will impact on President Buhari’s administration and the reputational value he will gain from that. A functional water transportation system will instigate economic development across the water channels, decongest our roads and make them safer for users. Big companies like Dangote will redirect their transport activities to the water ways and that will mean less heavy duty trucks on our roads, less accidents occasioned by dangerous truck drivers and longer life spans for our roads. The minister and all of us will definitely be happy for it.

But going forward, I think Chibuike Amaechi’s statement is an invitation for private sector participation in the sector. This is an opportunity for wealthy Nigerians and serial investors to take advantage of what seems like a challenge to government. Private Public Partnership (PPP) agreements should be developed along designated roots and ports. Private companies can dredge and manage water channels. Existing ports can be managed by private companies and new ones can equally be built and managed by private companies. The role of government should be to provide security, regulations and enforcement of rules, and revenue collections. Yet, government at different levels will hold equity shares in those private companies though minimal.

National Inland Water Ways Authority and the Nigerian Ports Authority under the Ministry of Transportation should come up with a template for private investor participation and all bureaucratic bottlenecks should be eliminated. Marauding civil servants who derive joy in dragging government projects backwards and discouraging private investors should be warned to keep off. There is no reason Nigeria and Nigerians should continue to suffer this much when we have these huge potentials and where there are investors who can help unleash the nation’s potentials. From my observations, our bureaucracy has become a curse rather than a blessing. Whether we call them civil servants or whatever, they have become our weakest link. Even when we tag politicians with corruption, it is the civil servants that are enablers and they appear much corrupt than politicians. Judging from the reason Baro Port is not in use today we can see their imprint. Someone in the service approved or allowed for a port to be developed without asking questions about the water channels. It is not that he or she is ignorant of the consequence for the nation but it didn’t matter to him or her as long as money was shared. Now the administration under which that project was conceived is gone, Baro Port is built but it cannot function because of the water channel is not dredged and those who are supposed to benefit from its operationalization are complaining.

Yet someone wants to blame Chibuike Amaechi or maybe President Buhari for letting us know the truth. Unfortunately they are dealing with the wrong guy. Those who who know Chibuike Amaechi knows he is a bold and courageous man. He has a culture of saying things as they are and he cannot be intimidated. Chibuike Amaechi loves this country and he has demonstrated that over time. He is detribalised, very focused and forward looking. Chibuike Amaechi is not a saint but on this issue you cannot contradict him.

Lets work with what he has told us and fashion a solution once and for all. This is an opportunity to discuss the entirety of the sector and water ways economy, it is huge and it can create thousands of job and improve our economy.

Great Imo Jonathan, a Strategist, Media and Public Relations Consultant writes from Abuja and can be reached through greatimosoundmind@yahoo.com