Following a message that was preached by the founder of Omega Fire Ministry, Apostle Johnson Suleman some months ago. Where he shared a testimony about one of his spiritual sons who is living in France and when he wanted to open a branch of their ministry in that Germany, he needed someone so he to oversee church over there. And he contacted his son about it, and his issue was travel documents to Germany. 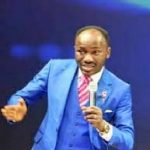 According to the man, he was lead by the spirit of God to tell him to proceed to the airport to watch what would happen and he did as he was instructed. He said the man was in the queue he felt uneasy so he was lead to the toilet and miraculously his spiritual son came out in Germany Toilet.

Today the story seems to have changed as a Nigerians man living in France identified as Osarob allegedly called out apostle Johnson Suleman for using him to lie with his preaching to say that his spiritual son entered France airport toilet and disappeared and appeared in Germany toilet. 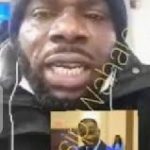 This man said that when the man of God came to France, some year ago they met and at that time he was high on drugs, so forged some story to that he entered the toilet in France and appear Germany Toilet without documents. He further said it was all a lie and was surprised that Apostle Johnson Suleman, took it to preach in his church. He alleged that the servant of God knows him and that he wants this video to get to him so he can see and know that he lied.

See also  From Falz to Ayra Starr, Wizkid, Asake & Others – Here's a List of Albums Released This Year