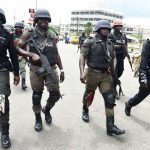 Twenty four out of 25 Takum youths abducted by kidnappers along Wukari – Takum road in Taraba state have been rescued.

It was gathered that the youths were rescued by combined team of soldiers and police from Benue and Taraba in an operation inside forests in both Taraba and Benue states few hours ago.

Baba Muhammed, a relation of some of the rescued youths, told Daily Trust in a telephone interview that 24 out of the 25 youths abducted last Wednesday were rescued.

He said search for the remaining one person is on and five of the rescued youths have been taken to hospital in Takum for treatment.

Muhammed stated that there was celebration at Anguwan Rogo ward in Takum town where all the youths were from.

“I can tell you that 24 out of 25 youths abducted were rescued by combined team of soldiers from Benue and Taraba states.

“We thanked the Army, the police and all those that helped in rescuing the youths including the media for reporting the incident,” he said.

It was gathered that some of kidnappers were arrested and no ransom was paid for rescue.

“It was a good job conducted by the soldiers who were from both Taraba and Benue states,” a resident of Takum said.

Meanwhile, the police spoke person of Taraba police command DSP David Misal said he would not officially confirm the rescue of Youths because he was now transfer.

“I heard about the rescue of 24 youths but l cannot officially confirm to you because right now I’m on transfer and the person that would take over from me is not yet on ground,” DSP Misal said. (Daily Trust)