In the gloom and doom of the ASUU strike, a 22-year-old Lagos State University 200-level student of Mathematics – Shoyoye Ismaila Oluwadamilare, has demonstrated the MOTOMATICS PHILOSOPHY, where 1 + 1 is equal to 11. The young student struck gold in the ongoing Homewin promo with just N500. He converted his luck into cash by buying a Homewin ticket on the 1st of May 2022 and won the first ever Homewin Salary 4 Life prize. He would receive one hundred thousand naira (N100,000) every month for the next ten years, making a total of twelve million naira (N12,000,000). 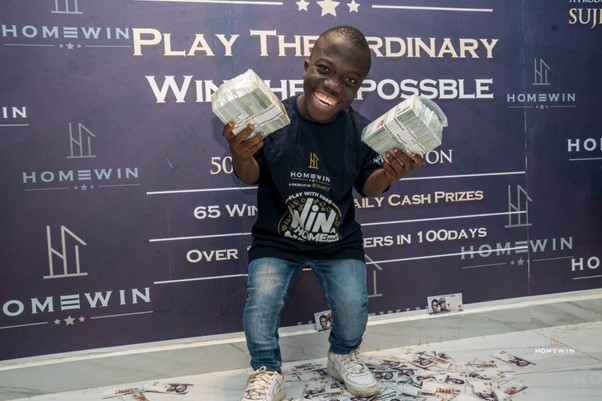 However, getting the young mathematician to claim his prize was quite an interesting story. On the 1st of June 2022 at about 4:45PM, a rigorous selection process began for the Homewin Salary 4 Life winner. Over 1000 played tickets were automatically selected from our system, the tickets were printed out and painfully diced into tiny units of paper and folded by over 100 company staff present at the office. Each staff was then mandated to select one folded paper, with each paper containing one unique ticket number. From the selected papers, the Group Managing Director of Sujimoto and Founder of HomeWin Promo – Mr. Sijibomi Ogundele picked the final ticket that became the winning ticket for the Homewin Salary 4 Life. 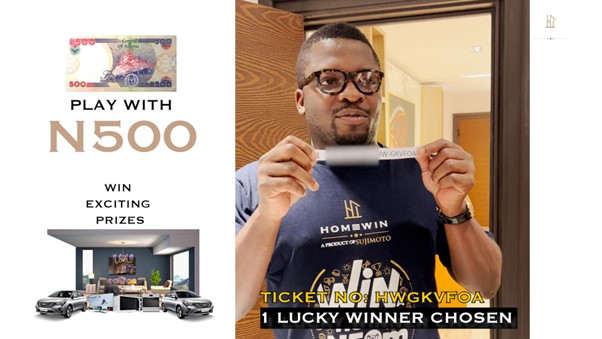 Interestingly, the ticket number belonged to a 22-year-old Lagos State University student, Shoyoye Ismaila Oluwadamilare, whom the team called immediately. Unfortunately, he was unreachable even after over 20 telephone calls initiated by our team, so we proceeded to send messages and voice notes through WhatsApp and still, there was no response from our winner. Consequently, the office closed for the day and at about 9:45PM, our General Manager communicated to us that he had received a voice note from our winner, saying he didn’t want to be disturbed and that he had no intention of being “fooled” by us, he even asked us “abi una wan collect?” which would imply that he was ready to make a mess of us should we proceed with our calls and messages. Apparently, he did not believe that he could ever win anything in this country. 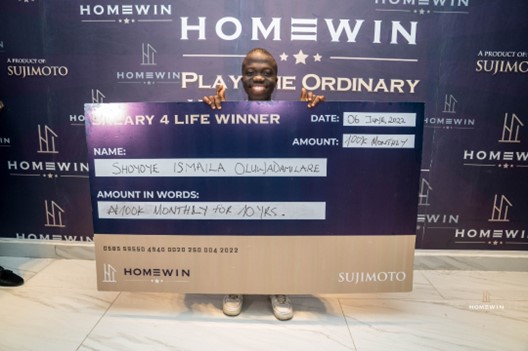 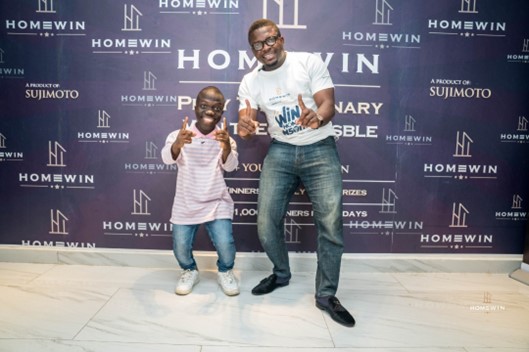 The following day at the office, some members of our team suggested that we select another winner from the pool of tickets, feeling very disappointed that someone could win such a huge amount of money and be unconvinced. Some even suggested that perhaps his “village people” had eventually caught up with him. While this sounds very funny, these were real thoughts and opinions of various team members. However, the Group Managing Director, Mr. Sijibomi Ogundele insisted that we reached out to Oluwadamilare once again and as luck would have it, he picked our call, and after some conversation with the team, he was finally convinced of his win and could not contain his joy and excitement. 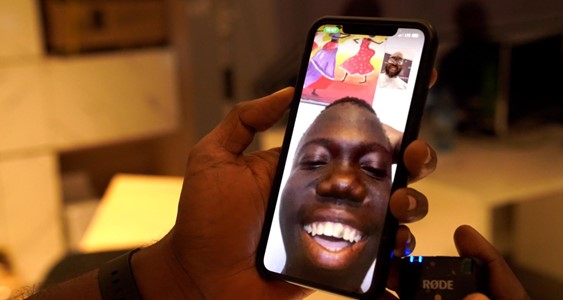 The events that surrounded getting Oluwadamilare to claim his Salary 4 Life prize, really had an impact on many members of our team, as we witnessed first-hand how badly broken the Nigerian society has become, how much Nigerians have lost hope and the belief that the life of anyone could change within a second. But in spite of this revelation, the integrity of the Sujimoto Group was committed to ensuring that the winner was reached out to by all and every means possible and we are happy we succeeded in this task. 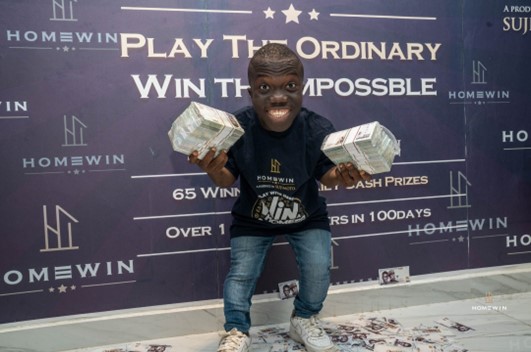 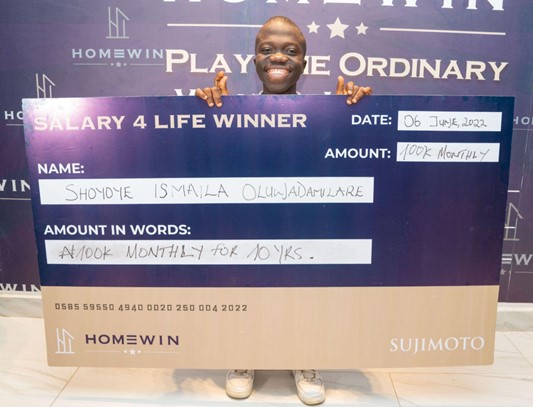 Going forward, we congratulated our winner, and invited him over to the Sujimoto HQ on the 6th of June 2022, where he was greeted and received by all members of the team and had a one-on-one session with the Managing Director of the Sujimoto Group, who not only congratulated him on his win but also promised to follow up on his education and to ensure that he remains a permanent friend of Homewin and the Sujimoto Group at large. Oluwadamilare mentioned that the money will go a long way to assist him in his school activities, as well as support his mother who has been of great help and support to him. 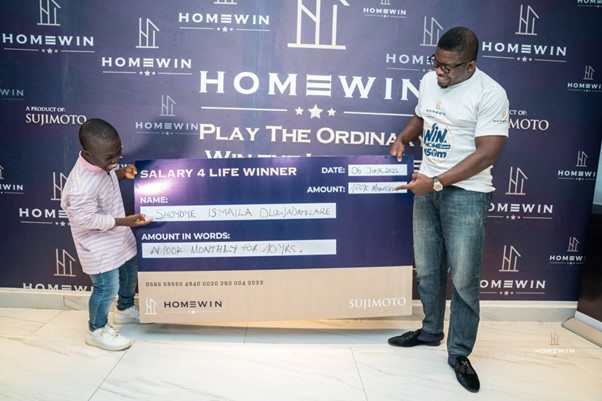 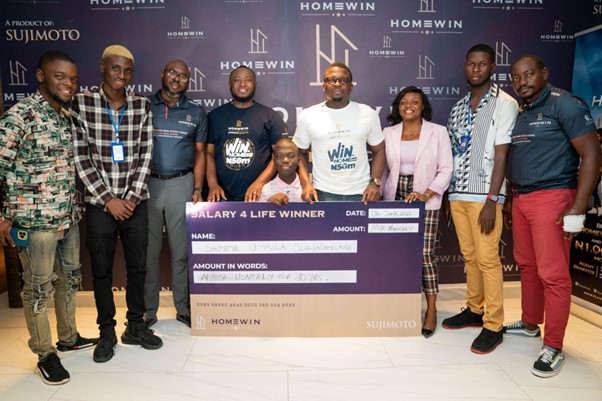 Sujimoto launched Homewin on May 1st, 2022 as a generosity movement, aimed at empowering Nigerians and helping them escape the difficulty of the trenches to a place of wealth. Making an impact in the lives of Nigerians has always been at the core of the Sujimoto vision. A close look at the organization’s history and interaction with its clients and the general public proves that beyond profit maximization, Sujimoto is strongly built on giving back to society. While speaking about his motivation for starting Homewin, the Founder and Group Managing Director, Mr. Sijibomi Ogundele narrated a very emotional experience. According to him;

Homewin is very personal to me because every day, I get calls from people going through different challenges in life. Everywhere I turn, there is someone going through a difficult time. Except we want to pretend about what is going on around us, it is obvious that poverty is increasing at an alarming rate in the country and the burden of responsibility is beginning to tell on so many. The price of food has skyrocketed. Those who could afford 2-square meal a day, are now struggling to afford one! As a man who is passionate about giving and believes strongly in the saying that “if your neighbor is hungry, your chicken is not safe” Homewin is that brand that puts you in charge of your fate and puts the power to win in your hands. 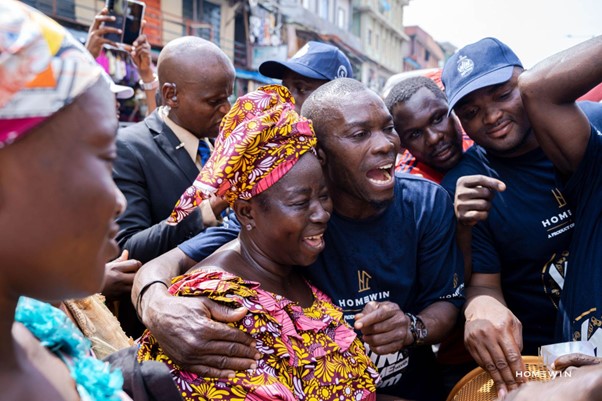 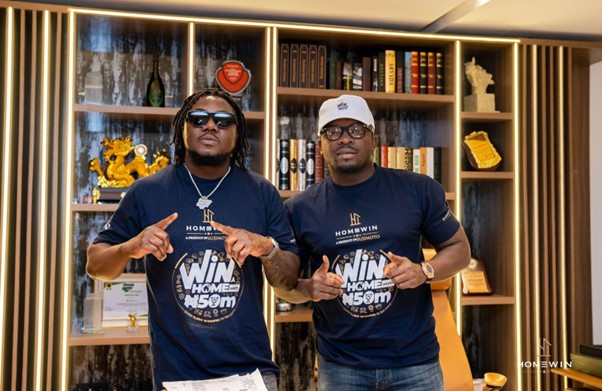 Homewin is the biggest promo in Africa, where with N500, you stand a chance to win a fully furnished apartment in Lekki worth over N50 million; 2 Brand New Cars; 100 Smart Phones; 50 Gas Cookers; 50 Smart TV sets; 65 daily winners of various cash prizes, one winner of a Salary for Life – N100,000 every month for 10 years; and over 11,000 estimated winners of various gifts and cash prizes.

See also  Man whose vehicle was impounded by Lagos Task Force breaks down in tears as his car is auctioned for less than N400,000 (Video) 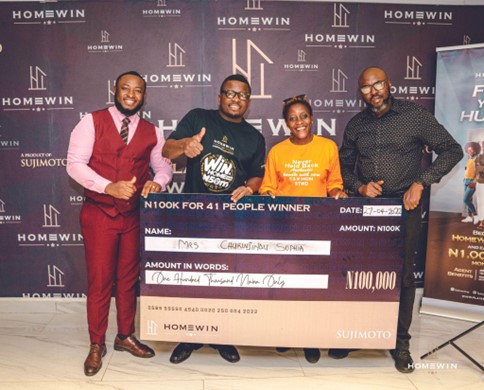 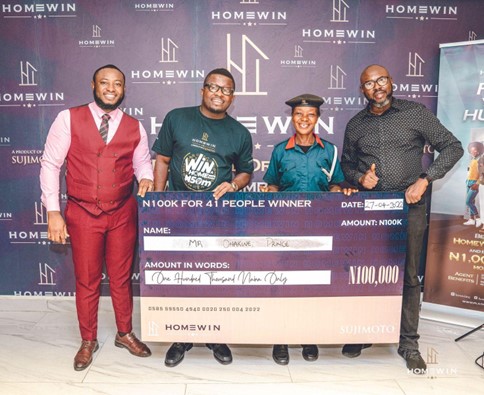 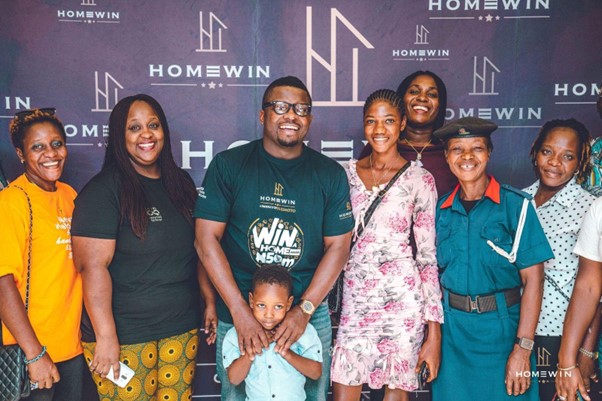 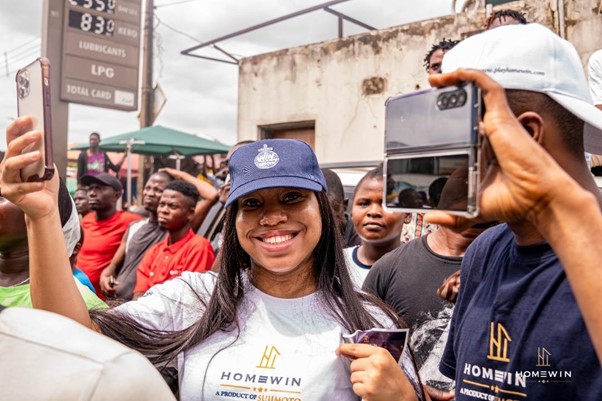 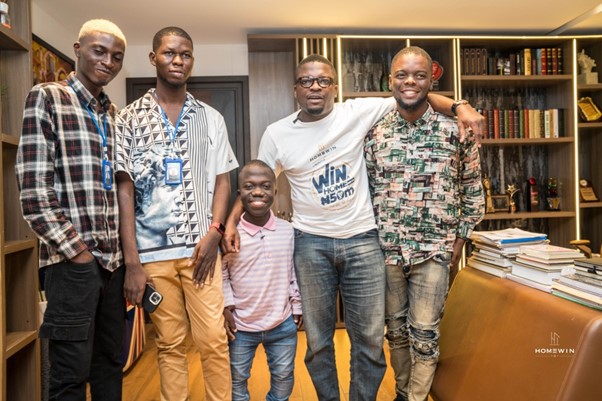 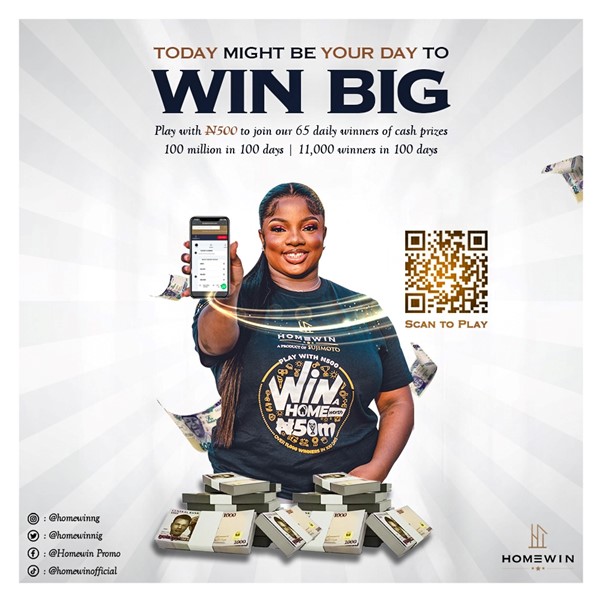