A newly married couple have gone viral on social media after images of their wedding went viral online.

The photos show a aged groom who is said to be 106 years old and his very young bride at their traditional wedding.

In the video making the rounds , the groom and bride were seen dressed in beautiful kente and dancing to Wendy Shay’s Akokora Gangster. The Old/Young couple was surrounded by a group of other people who had come to witness their union.

See another pictures below;

Laurel Suares: Because he doesn’t have Ned Nwoko’s kind of account balance, nobody is dragging her. This life no balance, full of hypocrisy

Josh Sunday: They just want to kill the old man ni o! Am sure his children are tired of him they want baba to go and rest in peace.. See the girl eye na.. She go just kill this man the first night.. Chai! RIP papa enjoyment🤣🤣🤣

Bobo Debayo: The papa must have in possession thousands of hectares of land etc…the lady too securing her future.gods are not to blame. 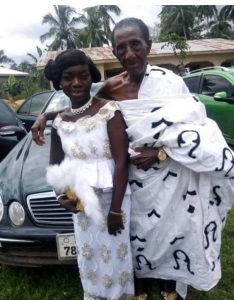 Nneka Nneka: Regina is far more better than this girl
Maybe the family of the bride used her to end land dispute

When I said thunder I mean the one from sambisa forest